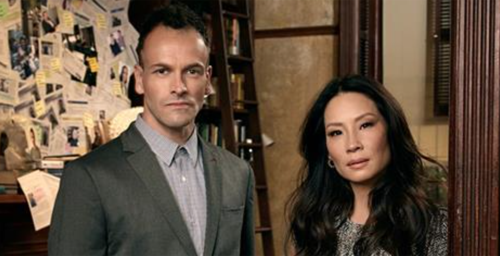 Elementary, one of our favorite detective drama/comedies returns to CBS tonight with an all new Sunday  April 10, season 4 episode 19 called, “All In,” and we have your weekly recap below. On tonight’s episode, a mysterious woman who claims to be a former associate of Sherlock’s brother (Mr. Morland Holmes) tells Holmes (Jonny Lee Miller) that her life is in danger. It’s soon revealed that the woman runs illegal, high-stakes poker games.

On the last episode, a survivalist doctor went missing, and Holmes and Watson must determine whether he purposely went off the gird or was a victim of foul play. Did you watch the last episode? If you missed the episode we have a full and detailed recap right here for you.

On tonight’s episode as per the CBS synopsis, “a mysterious woman who claims to be a former associate of Sherlock’s brother tells Holmes that her life is in danger. It’s soon revealed that the woman runs illegal, high-stakes poker games. As Holmes and Watson investigate, Joan becomes suspicious that their new client isn’t being truthful.”

Are you looking forward to the season 4 episode 19 tonight? Be sure to come back here later tonight at 9 PM EST for our awesome recap of this episode. In the meantime, hit up the comments below and let us know how excited you are for season 4 and what you think of it so far.

It was another slow day at the office on tonight’s episode of “Elementary” when a new case literally landed on their doorstep.

Apparently Ms. Lin Wen had been attacked inside of her home and thankfully she had managed to escape her attacker thanks to the fire escape, but it seems she can’t go to the police or even to a hospital for that matter. So Joan ended up having to treat her for the gunshot wound that Ms. Wen kept trying to pretend didn’t hurt. And Sherlock asked his latest client why someone had been trying to kill her.

And it turns out she had a quite a story. Lin Wen had heard about Sherlock and how he helps people from his brother. She said that she had once acted as Mycroft’s real estate agent and so she met the older Holmes however she claimed Mycroft was in no way connected to her other life. Or that he knew about her other profession.

Which ultimately was illegal gaming by the way. Wen runs a side gaming den that unfortunately for her had attracted some unwanted attention lately. So the game table that she had sent up had recently been robbed of nearly two million dollars. Yet, Wen didn’t know who had been behind it or what happened to her lookout.

The break-in, you see, had been part of the robbery. Someone had wanted to make it look as if Wen had robbed her own table and so she had seen the bag full of missing money in her apartment right before someone tried to kill her. But she doesn’t know why someone would do that? Go through the trouble of stealing from her and the others then leave the money behind as a way to frame someone else for the robbery.

Yet, while Sherlock and Joan had been keeping quiet about what happened, one of the gamers had showed up a dead.

So that’s when the whole secrecy thing went out the window. Sherlock and Joan had to inform the Captain and Detective Bell about what had happened earlier with their client Wen and how she had nearly been killed. And then they had to mention the illegal gaming den they had found out about, but again had kept secret.

And, well, the captain was more than upset. He felt the private detectives should have come to him first when Wen arrived on their doorstep. So he asked for some breathing room from the two and only came around to talk to them after he and Bell found something.

The guys had gone to the apartment that was used for the poker game and there they found a strange light bulb. Apparently someone had switched a regular light bulb with a fake one that was actually a camera. And so that’s how the thieves knew when to strike yet Wen had claimed that no one had known about the game in the few hours before.

So they had asked her if she had ever left someone alone and she told them about Mateo Pena. It seems she had left him for about thirty seconds because he had spilled something on the floor that she had to clean up. But she said she would never have guess that Mateo would steal from her and funnily enough she was partly right.

Mateo hadn’t actually arranged for armed men to break in, but he had set up that camera to cheat people out of their money at the table. He later told Bell and Sherlock that he had wanted to win his hand so he had his assistant Trevor spy on everyone. You know in order to send him a single of what he should do.

Although the robbery thing wasn’t him. In fact, he had been so desperate to prove that he had been startled as everyone else that he had even handed over the footage from that night. And therefore he didn’t seem as if he was their guy, but Joan barely got a chance to look through the footage he provided when NSA shut her down.

An agent informed her that she and Sherlock had crossed over into an open investigation of theirs. So the two had been told to keep out and Sherlock willfully chose to later ignore them. He kept looking into Ian Walker who had been the dead intern and he would have still been looking into it if he hadn’t caught something on the footage they still managed to keep from that night.

NSA had breathed down his neck because they claimed to be after spies. However, Sherlock had been the one to figure out what did happen that night because he hadn’t been just plain old robbery. It had been a distraction.

Wen’s dealer that night had faked the robbery in order to get her hands on Mateo’s keys. The one that would give her access to diplomatic message all throughout the world. And that would fetch a hefty price on the black market.

So, despite what NSA wanted, Sherlock first caught the spies and that led to him finding his killers. However, Joan knew that Wen had lied about her relationship with Mycroft so he looked into the other woman and found out that she was her half-sister. And that she had only come to Joan because she needed help, not because she wanted to develop a bond.