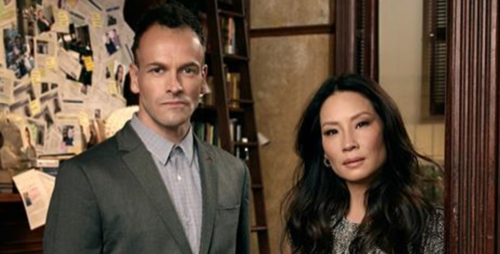 Elementary, one of our favorite detective drama/comedies returns to CBS tonight with an all new Sunday  March 27, season 4 episode 18 called, “Ready or Not,” and we have your weekly recap below. On tonight’s episode, a survivalist doctor goes missing, and Holmes (Jonny Lee Miller) and Watson (Lucy Liu) must determine whether he purposely went off the gird or is a victim of foul play.

On the last episode, at the urging of Morland’s wealthy associate, Henry Baskerville (Tom Everett Scott), Holmes and Watson looked into the death of his brother and discovered that a witness saw the man chased to his death by a large, glowing animal too fantastic to be real.  Did you watch the last episode? If you missed the episode we have a full and detailed recap right here for you.

On tonight’s episode as per the CBS synopsis, “a survivalist doctor goes missing, and Holmes and Watson must determine whether he purposely went off the gird or is a victim of foul play. Meanwhile, Sherlock exhibits odd behavior when his romantic relationship with Fiona hits a rough patch.”

Are you looking forward to the season 4 episode 18 tonight? Be sure to come back here later tonight at 10 PM EST for our awesome recap of this episode. In the meantime, hit up the comments below and let us know how excited you are for season 4 and what you think of it so far.

Lloyd Springer wasn’t exactly a new face to either Sherlock or Joan. Yet he had gone to them on tonight’s episode of “Elementary” because he had needed their help with his son Brian. Brian had recently been implicated in the disappearance of his doctor and so his father, the all and powerful Springer, had wanted Sherlock to prove that his son had nothing to do with Dr. Badar disappearance. Or in this case possible death.

But Springer hadn’t fully been honest with Sherlock. Sherlock and Joan had been told that Brian suffered from chronic back pain and that he had gotten into a fight with Dr. Vincent Bader at least two days before the other man’s disappearance over pills yet Sherlock saw something in Brian. He saw an abused kid whose own father was the root of the chronic injury. So Sherlock ended up telling Springer two things. That he was about to hit him and that he was going to take the case.

And after he finished punching Springer, he then began working the case. Only things took an unexpected turn when Sherlock began questioning the wife. The wife was apparently not upset with Brian so she had honestly wanted to help clear his name. Hence she told the private instigator everything about her husband.

Starting with the alleged affair. It seems two of the wife’s girlfriends had seen Vince taking a young red head to lunch and so she had later asked her about it. Though he chose to fob her off rather than actually answer. So she never got the other woman’s name much less the reason behind the lunch, but she figured it had to be an affair else there’s no reason why he would have hidden his association to that mystery woman.

Although Vince hadn’t been having an affair because Joan later found the woman he was allegedly having it with and she denied all romantic involvement, but did admit to helping Vince break the law. As it turns out the drug rep that had gotten the contract for Vince’s office had won herself that contract by helping the good doctor cover up certain discrepancies. Like how he was short on over two-hundred-thousand-dollars’ worth of pills.

So Vince Badar wasn’t some innocent doctor. He had begun selling pills out of his office to drug dealers in order to get his hands on some much needed cash and eventually he left himself open to an audit from the Bureau of Narcotics Enforcement so that’s he borrowed some pills from a drug rep to cover himself. And he had promised the woman that had helped him out that he wasn’t going to end things with the drug dealers.

Who had still been calling his phone at his office so it wasn’t that association that led to his death. Yet Vince had been found dead and the only thing that either the police or the private investigators could track was the unusual withdrawal some time ago that went towards paying for “the Keep”. “The Keep” being a luxury underground bunker that anyone could buy their way into if they had a hundred-thousand-dollars to spare.

So Joan and Sherlock decided to take a look at “the Keep” and what they found was a pretty great stage for fraud. Apparently the owner of the place had set up the bunker to look as if it could be self-supported, but it wasn’t. There wasn’t a backup generator, the bunker did not have its own air supply, the hospital clinic did not have backup drugs or even a single band-aide. And if there ever was a nuclear fall-out then there’s nothing to prove the bunker would survive the initial onslaught.

And therefore it was all a trick. A simple way for one man to come tens if not thousands of others out of their money though someone must have gotten upset because Sherlock did go on to find the crime scene there. Meaning Vince had gone to check out the bunker with someone and that someone had turned on him.

It seems the bunker couldn’t be opened by only one person, it had to be opened by two. So the detectives knew that Vince hadn’t gone into the Keep alone. Only they didn’t realize who he had gone with until they started to think about the drug dealers. The same ones that hadn’t thought anything was amiss with Vince because they continued to call. And so that’s when they began to look at the late doctor’s partner.

Vince had had a business partner that he had probably told about his financial trouble so this friend would have gone with him to the bunker. That was supposed to be overflowing with drugs that they could steal, but then the both would have been disappointed the second they realized the fraud. So this friend knowing that their business was eventually going to tank all because of Vince’s problems would then lash out.

And unfortunately that’s what happened to Vince. He had led someone down the criminal path and he had gotten killed when one of them figured out that he was just going to keep continuing to make mistakes. Whether it was buying into another fake bunker or bringing down another audit that could potentially destroy both of their careers.