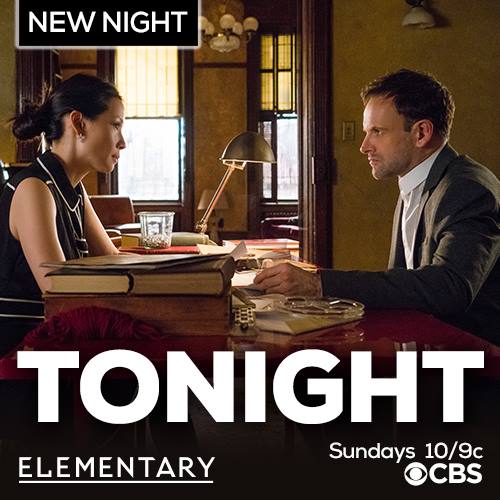 Elementary, one of our favorite detective drama/comedies returns to CBS tonight with an all new Sunday March 20, season 4 episode 17 called, “You’ve Got Me, Who’s Got You?,” and we have your weekly recap below. On tonight’s episode, Holmes (Jonny Lee Miller) and Watson (Lucy Liu) investigate the murder of a man who secretly fought crime dressed as a comic book superhero.

On the last episode, at the urging of Morland’s wealthy associate, Henry Baskerville (Tom Everett Scott), Holmes and Watson looked into the death of his brother and discovered that a witness saw the man chased to his death by a large, glowing animal too fantastic to be real. Sherlock considered intervening when the trauma from the bombing at the morgue negatively impacts ME Hawes’ work. Tom Everett Scott guest stars as Henry Baskerville in an episode inspired by Sir Arthur Conan Doyle’s novel “The Hound of the Baskervilles. Did you watch the last episode? If you missed the episode we have a full and detailed recap right here for you.

On tonight’s episode as per the CBS synopsis, “Holmes and Watson investigate the murder of a man who secretly fought crime dressed as a comic book superhero. Meanwhile, Morland makes a surprise donation to Watson’s favorite charity, in order to compel her to do him a business-related favor.”

Are you looking forward to the season 4 episode 17 tonight? Be sure to come back here later tonight at 10 PM EST for our awesome recap of this episode. In the meantime, hit up the comments below and let us know how excited you are for season 4 and what you think of it so far.

Sherlock has been making new and even stranger friends on tonight’s all new episode of “Elementary”.

Sherlock has apparently befriended a group called Everyone which as it turns out is a hacker collective and, anyways, he talked his new friends into helping out Joan’s charity. Therefore, these people literally took the clothes off of their own back in order to help Joan collect enough clothes for the homeless. And it’s safe to say that their donations towards Joan’s friend’s charity had gone up for the fourth year in a row.

But this year something strange happened. Joan had been collecting the clothes as she normally does when her friend Tammy who was in charge of the drive told her that someone had written the charity a big fact check and that this person had also claimed to be a friend of Joan’s. And, well, Joan knew her friends but she wouldn’t have counted Morland Holmes as one of them.

So she was questioning what was really going on and namely considering the strings attached to that check when a new body came on the scene. A murdered body had been found outside of a nearby deli and the victim had been wearing a comic book costume at the time of his death. Though, there had been an explanation for that last part.

It seems the man that was dressed as the comic book hero Midnight Ranger had honestly believed he was the Midnight Ranger. So much so that not only did he give his dry cleaners the same name as the character’s but he also became vigilante. That often fought crime in his neighborhood and who he had brought down the local crime rate.

But, as it turns out, the man that claimed to be Danny Dalton was still very much human. He had been found two gunshot wounds to the chest and surprisingly the neighborhood later told the cops that he hadn’t known his real name. Just his alter ego.

So the victim would have remained a John Doe if he hadn’t been for the other community that preferred to think of themselves as the hero community. Apparently Mike Stratton, which was the Midnight Ranger’s real name, had hung out with likeminded people that felt the cops were either not doing enough or they needed help. And therefore it had been one of Mike’s friends that told Sherlock who he was.

And Ben had given them a lot. He had told Joan and Sherlock about Mike and his helpfulness did appear genuine. Yet not long after their conversation, both Sherlock and Joan were kind of left baffled as to why Ben who had been a different comic book hero when the three first met would suddenly take up the mantle of the Midnight Ranger.

Not only was such a thing suspicious but it had also provided a motive. So Joan had thought that Ben was their guy. She theorized that he must have gotten jealous of his friend’s notoriety and eventually killed Mike in order to become the new Midnight Ranger. And while that may have sounded farfetched, there was eventually evidence pointing to Mike having struggled with someone wearing a hero costume as well.

So Ben was brought in and he was questioned. However, he was later deemed innocent by Joan and Sherlock both. Who had been left with the impression that Ben would never hurt Mike seeing as Mike had been the only person to believe in him and who had honestly the idea that he could be a hero in the first place.

Only something wasn’t adding up with Mike and that had been his weird relationship with Al Baxter.

Initially the relationship had looked as if it was all business but soon Sherlock found a cop willing to testify that Al had called Mike to bail him out. So that led to Sherlock wondering about their friendship and why Al hadn’t mentioned it. Mike, you see, had gotten his gear and his weapons from Al who had claimed that he wanted to use Mike as a way to make the comic books great again, or so he claimed to Sherlock, so he had used Mike as a walking billboard. Only Al had failed to mentioned several other things that would have been deemed significant.

He had said he was the grandson of the original comic book creator, but he had stayed quiet about what his job actually entailed nowadays because he wasn’t as integral as he let on. Al had simply been a figurehead that the publisher had pushed on the company as a way to get some good PR and his boss would later admit that Al wasn’t likable. Al it seems had become slightly obsessed with the legacy. Almost as if he wanted to be in charge of everything attached to the Midnight Ranger.

Also, Al didn’t tell Sherlock that he had been out to dinner with a couple of producers that were looking to create a Midnight Ranger movie just a few blocks from away the crime scene. So that could explain why he didn’t bother telling the police that he had been opposed to the movie and that he had hated the new owners of Superlative Comics for agreeing it. But Sherlock was able to piece together the rest from there.

Al as it turns out had revealed to Mike in a drunken stupor (for they were friends) that he was going to go on a rampage at the comic book headquarters as a way to protect his grandfather’s original idea and so Mike had later died that night in trying to stop him.

But as for Joan, she had decided to help Morland even though Sherlock had warned her about getting into business with his father and she was keeping what she doing a secret on tonight’s episode.