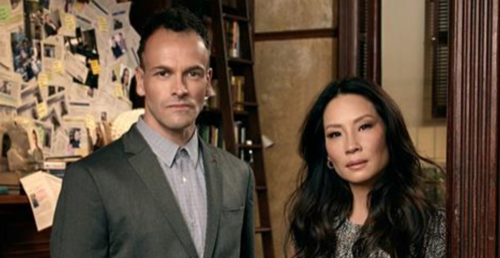 Elementary, one of our favorite detective drama/comedies returns to CBS tonight with an all new Sunday April 17, season 4 episode 21 called, “Ain’t Nothing Like the Real Thing,” and we have your weekly recap below. On tonight’s episode, Holmes and Watson investigate a double homicide and discover the victims were staging a fake murder at the moment they were killed.

On the last episode, Holmes and Watson investigated a woman’s murder and learned that her death was linked to a piece of artwork that was tied to a crime that was committed when she was in college. Did you watch the last episode? If you missed the episode we have a full and detailed recap right here for you.

On tonight’s episode as per the CBS synopsis, “Holmes and Watson investigate a double homicide and discover the victims were staging a fake murder at the moment they were killed. Meanwhile, Joan’s inside man at Morland’s office encounters a problem that threatens to expose her spying to Holmes and his father.”

Are you looking forward to the season 4 episode 21 tonight? Be sure to come back here later tonight at 10 PM EST for our awesome recap of this episode. In the meantime, hit up the comments below and let us know how excited you are for season 4 and what you think of it so far.

Has Joan finally gone too far on tonight’s episode of “Elementary”? Apparently Joan isn’t worried about crossing Morland Holmes and so recently she’s begun to spy on him. And she’s been blackmailing someone at his company to help her.

It seems Joan had been hired some weeks back to find out who was leaking important information inside of Morland Holmes’s company and she did find the guy that had been selling Morland out to his competitors. However, Joan didn’t turn this man over or even report him to the police much less Sherlock. Instead she had kept quiet. And she had use the information she had on him to blackmail him into spying on Morland for her.

And so this isn’t the Joan from before. The one that liked to follow the rules and that would actually reel Sherlock in on occasion. Yet, Joan wanted to find out what Morland was into and recently her source told her about Ruslan Krasnov. Ruslan was an escaped Russian convict whose government was desperately trying to find him and for some reason Morland wanted to find him as well.

But Joan didn’t know why and she knew she couldn’t ask for Sherlock’s help. Sherlock had become suspicious of her as it was because she had been coming up with a lot more excuses lately yet a new case did tie up his hands somewhat. Especially as it had been an unusual double homicide in Red Hook.

The two victims had been Jared Talt and Butch Callahan and from all appearances they didn’t know each other. Yet, Sherlock had found a camera not that far from the crime scene and there had been plenty of photos of Talt’s dead body on it. Only Jared hadn’t been found that way when the police found him and it didn’t make sense for the killer to rearrange the body after he took photos.

So Sherlock and Bell had gone to Butch’s home because they wanted to find out what he had been into and Sherlock ended up finding a bunch of bloody shirts. Not that it was real blood, but Butch wanted it to look that way. And therefore Sherlock figured out how Butch and Jared had known each other.

Sherlock eventually realized that Butch, who was a retired veteran, had been hired to kill Jared. It seems someone paid him to kill the other man and Butch agreed to it even though he wasn’t going to follow through. What he was going to do was fake Jared’s death with Jared’s help no less. And then get the person who hired him on a record admitting to arranging Jared’s death.

However, something went wrong. Either a second assassin was hired or the man that hired Butch had found out Butch was going to turn against him. So he decided to kill both men and arrange for it to look like they killed each other. And that way he could keep his money.

And so they looked for the person that hired Butch though they got a little help. Jared’s widow had after all been very forthcoming when she told the police about Jared’s business partner and how the two men had been arguing a lot lately because their business was losing money. So the police interviewed the partner and what they found out was that Jared’s supposedly best friend was sitting on twenty million dollars. That he hadn’t wanted to share with Jared.

So Davis Potter had looked like their guy, but that would have only have been half the truth. Potter had freely admitted to the fact he had hired Butch to kill Jared however he went on to say that there hadn’t been a second assassin because he hadn’t thought there was a need for one. And there’s no way that Potter could have killed the two men themselves seeing as he had an airtight alibi for the murders.

But if not Potter then he who? That was the question that bothering the police and so they checked out whether or not Butch may have had partners who didn’t want to fake anything or split up the money only they couldn’t find anything. Not even on Butch’s longtime girlfriend. Who hadn’t known what Butch was up to or that Butch later had a change of heart. So everything could have come to a dead end yet Butch’s girlfriend managed to help Sherlock and Bell.

The girlfriend had apparently been called by Butch’s associate in Tahiti and she had been asked about the money that was still needed on the condo for one down there. But it wasn’t for Butch, it seems Butch and Talt had become friends so Butch was helping Talt get out of the country and Talt was going to go to Tahiti by himself. And that meant Talt was going to basically abandon his wife.

The same woman that had been so very helpful earlier. So the police finally looked into the widow’s alibi and they found out she had lied. She hadn’t been in Virginia with her sister, she had driven back to the city after finding out her husband was going to leave her. And that’s probably when she decided to kill him, but Butch had been there so she had tried to arrange it to look like a robbery gone wrong.

Only no one had bought that because she had put Butch’s gun in the wrong hand and thankfully she had also left behind the missing diamond in her wedding ring at the crime scene. So the police had everything they needed to arrest her on a double homicide. And Butch’s girlfriend could at least have peace of mind knowing that Butch had been in love with her.

But all of Joan’s digging resulted in some unfortunate new. Morland became aware of what was going on and Joan’s spy Emil had been randomly gunned down during a “simple” robbery. So it looks like Joan may have started something she won’t be able to finish.