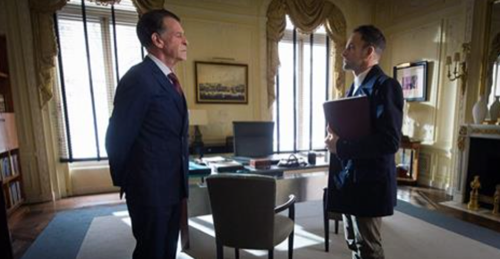 Elementary, one of our favorite detective drama/comedies returns to CBS tonight with an all new Sunday April 24, season 4 episode 22 called, “Turn It Upside Down,” and we have your weekly recap below. On tonight’s episode, Holmes (Jonny Lee Miller) suspects his father of murder after one of his dad’s employees is killed under the guise of a robbery.

On the last episode, Holmes and Watson investigated a double homicide and discovered the victims were staging a fake murder at the moment they were killed. Meanwhile, Joan’s inside man at Morland’s office encountered a problem that threatens to expose her spying to Holmes and his father. Did you watch the last episode? If you missed the episode we have a full and detailed recap right here for you.

On tonight’s episode as per the CBS synopsis, “Sherlock’s father, Morland (John Noble), becomes Sherlock and Joan’s prime suspect in a murder investigation after one of his employees is killed under the guise of a robbery.”

Are you looking forward to the season 4 episode 22 tonight? Be sure to come back here later tonight at 10 PM EST for our awesome recap of this episode. In the meantime, hit up the comments below and let us know how excited you are for season 4 and what you think of it so far.

Sherlock hasn’t been a fool. While he may have pretended not to notice how Joan has been running off a lot lately, he’s been fully aware that there was something up with her and initially he thought that maybe she just had a new lover. And that she was probably too embarrassed to tell him about it because of her past with Mycroft, but recent events have made Sherlock rethink his earlier assumption.

The two had gotten called out to the scene of a crime. Apparently a robbery had gone bad and there had been more than one casualty because of it yet Joan hadn’t been her usual distance self at that particular crime scene and for some reason she didn’t want to why she had reacted the way she did. At least not until Sherlock had later hounded her about it and demanded to know what happened when she found out one of the victims had been Emil Kurtz. And why didn’t she tell Detective Bell that she had known one of the victims.

However, Joan eventually came to regret telling Sherlock everything she knew. She had told him about the time she had accepted Morland’s offer to find a mole within his organization and that said mole prove to be Emil. Only she had upset Sherlock and gotten yelled at because she told him about how she came to use Emil as her own spy against Morland. Which Sherlock thought was the stupidest thing she could have done.

Sherlock had tried to warn her about his father and he even said Morland was the devil incarnate yet Joan had ignored everything he said. She had first agreed to work for Morland and then she had made an enemy out of him. So the one thing that Sherlock wanted to know was why Joan hadn’t come to him. Especially after she realized Morland was onto her.

And the only thing Joan could say in her own defense was that she didn’t think Sherlock could be objective. She said he tended to see his father one way and one way only. Yet, because of what they both knew about his father and Emil, Sherlock then had to go to Captain Gregson and explain that the dinner shoot-out might not be what it seems because his father could have hired the hitman.

So naturally that had surprised Gregson. He hadn’t heard much about Sherlock’s father, but he never would have thought that Sherlock would suspect his own father of murder. Though Sherlock did eventually convince the captain to purse that line and later they found a hitman that surprisingly admitted to killing Emil for fifty grand. And so they thought this hitman would lead back to Morland.

But it didn’t. The man that perfectly fine with admitting he killed Emil as well as others just to cover up Emil was his target hadn’t heard of a Morland Holmes much less know the man. So that raised the question of what if. What if Morland hadn’t been behind the hit on Emil? What if it had been someone else was instead?

And therefore the hitman, Arthur Tetch, gave the police the only thing he thought could help. He told them that the person that had hired him to kill Emil had also hired him to kill Dr. Naylor. A forensic psychologist that was often called by the prosecution to determine whether or not a defendant was competent for trial. So there didn’t appear to be overlaps between her enemies and Emil.

Yet, they had to into anyways and Sherlock kept trying to find a reason why his father would kill a s psychologist. Only there wasn’t a reason. Morland had nothing to do with the psychologist and he proved that for himself when he later found evidence to show that he hadn’t had anything to do with Emil’s death either.

So Sherlock was forced to give up on his theory about his father. However, he did find one reason why someone would want to kill Dr. Naylor. She had apparently come up with a survey called the Dante’s test and it was supposed to be used in setting a standards sentencing in court for anyone trialed for depraved acts, but Sherlock found out that someone could use that same survey to find sociopaths and possibly even hire them. Which was probably what happened with Tetch.

The hitman had taken the survey because he had seen it online somewhere and so the person that hired him had used his answers to detect what sort of person he was. Then hired him to kill Naylor before she found out her survey could be misused. So once Sherlock figure out how the hitman had been hired, he realized there was one other person that had access to the survey’s results and who would personally want Naylor dead. And yet he wanted to know who had hired Naylor’s lab assistant to find sociopaths.

And it had shocked him the second he figured out Moriarty was behind everything.