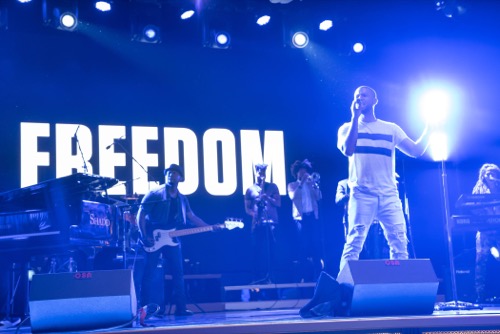 Empire’s Jussie Smollett has released a new song a week before the Season Three premiere. The song is titled “Need Freedom” is sung by Jussie Smollett, who portrays Jamal Lyon on the FOX hit series. The song is about ending violence, particularly gun violence. This seems so fitting, since Jamal was shot towards the end of Season Two, taking a bullet for his father, Lucious Lyon (Terrence Howard), when Freda “Gatz” Gathers (Bre-Z) stole a security guard’s gun intending to kill Lucious after she learns he was the one who murdered her father, Frank Gathers (Chris Rock).

“Need Freedom” makes references to recent horrific events like the mass shooting that took place at Pulse Night Club in Orlando, Florida on June 12th this year. Where a single gunman walked in, and mercilessly murdered forty-nine people, and injured another fifty-three. Jussie Smollett had an interview with Billboard, where he revealed that the shooting of Philando Castile really effected the song.

For those of you who do not remember, Philando Castile was in his car with his girlfriend and her little girl in the back seat. When asked for his license and registration, he informed the police officer that he had a gun and a permit to carry it. There is a video, that the girlfriend recorded of the incident, but it doesn’t show why the officer opened fire. Philando died less than an hour later.

Empire’s Jussie Smollett goes on to say, “I recorded this exactly seven days after Philando Castile was shot. Between the shootings of Castile, Alton Sterling, at the Pulse in Orlando and the police officers in Dallas – not to mention the other numerous killings over the last couple years – it was like we couldn’t breathe. What are we doing as a people, a nation; what messages are we sending to the next generation. Then this song came.”

Empire’s supervising music producer, Rodney Jerkins added in the interview that the song was originally about “Free Freda”, and that will be the version played on the Season 3 premiere; but because gun violence and Black Lives Matters are both so prominent in the media, they have decided to make the title of the song “Need Freedom”.

Be sure to watch FOX’s amazing, hit series Empire, when it returns for Season 3 on Wednesday, September 21, 2016!