Empire Recap – Hakeem Declares War: Season 3 Episode 5 “One Before Another” 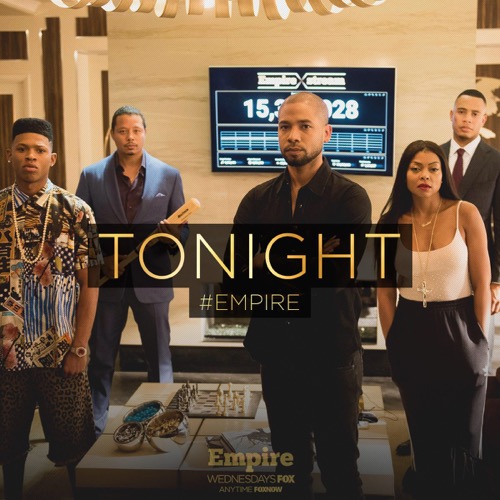 Tonight on FOX their blockbuster drama Empire airs with an all-new Wednesday, November 9, 2016, episode and we have your Empire recap below. On tonight’s Empire season 3 episode 5 Cookie (Taraji P. Henson) finds herself caught off-guard during a routine meeting with her probation officer.

Did you watch the Empire season 3 episode 4 where things heated up between Cookie and Angelo (guest star Taye Diggs), so Lucious finally recognized Angelo as a formidable rival and prepared to take him on.  If you missed it we have a full and detailed Empire recap, right here!

On tonight’s Empire episode 4 episode as per the FOX synopsis, “Lucious and Andre are on high alert as they wait for Shine to retaliate after their latest business encounter went south. Jamal, who has yet to perform in front of his fans, teams up with Hakeem for a performance that he thinks could help him face his fears. Meanwhile, Cookie is caught off-guard during a routine meeting with her probation officer.”

Tonight’s episode of Empire kicks off with Jamal in the studio with Derek – they’re working on some new music. And, they are totally oblivious of the fact that all hell is about to break loose, courtesy of Shyne. Meanwhile, Cookie is having a morning coffee date with D’Angelo.

Lucious is on high alert, he knows that it is only a matter of time before Shyne fights back. He escorts Anika and the baby to her Doctor’s office in an armored car with security guards. Anika rants that the security is ridiculous.

Andre wakes up and is making breakfast in the kitchen. Shyne walks in with his men, guns drawn. Andre stares back – he thinks he is hallucinating. Nessa comes out of the bedroom in her underwear and pushes the gun out of Shyne’s hand. Shyne freaks out when he realizes Nessa is sleeping with Andre Lyon, but vows to come back and finish the job.

Lucious calls a family meeting at Empire. He explains to Jamal, Hakeem, and Cookie that he and Andre had an altercation with Shyne. Jamal’s not happy that Shyne showed up to his apartment with a gun. Hakeem is freaking out – he has music in the works with Shyne and he promised his fans that he would release it. Lucious says that the show goes on as planned, he has Shyne “exactly where he wants him.”

Jamal is plotting on making a come back. He takes Hakeem aside and says that he wants to team up on a new track with Hakeem. He still has stage fright, he wants to sing in his livingroom with Hakeem and stream the show live from there. Hakeem and Jamal go live on X-stream to announce their show, while they are filming their announcement – Tiana’s new boyfriend Graham interrupts them and challenges Hakeem to a rap battle. It has Lucious’ handiwork written all over it.

Andre meets up with Nessa, she’s furious that Andre hooked up with her and didn’t tell her the truth about what happened with Shyne. Andre tells Nessa that he and his dad want to have a sit-down with Shyne and smooth things over.

Cookie heads to check in with her parole officer, and she’s almost an hour late. Her PO is not happy to see her, and lectures her about being late. Something is off – everyone at the office is giving her dirty looks. Cookie’s PO threatens to send her back to prison for being late and says that she has to check in three times a week now.

Hakeem heads over to his dad’s house, he’s reading to the baby and putting her to sleep. Lucious lectures Hakeem about taking on Graham and battling against him to prove that he is a Lyon. He reads Hakeem an excerpt out of the book he was reading to Bella, encouraging him to become a “destroyer of man.”

Jamal and Hakeem are rehearsing for their live show. They’re having some creative differences. Jamal says that Hakeem is going too hard. Hakeem scoffs that this is supposed to be a clapback to Graham, and he can’t sing a melody with Jamal. Jamal is the one that begged him to do a duo show to get his career back on track, he’s not in any position to be laying down terms and conditions on the song.

Shyne and Nessa show up at Lucious’ house for the sit down. Lucious and Shyne bicker back and forth – then Shyne demands they get down to business. Anika interrupts and works her magic on Shyne and smooths things over. Shyne and Lucious hash out a deal and shake on it.

Cookie shows up at Angelo Dubois’ apartment – she accuses him of making some phone calls to her probation office. She thinks that Angelo pulled some of his political strings and that is why her PO is being so strict with her.

The next day, Cookie and Jamal show up at Hakeem’s apartment. She orders Hakeem to perform the show with his brother the way that he is supposed to and “stop playing with her money.”

Later that night, Jamal and Hakeem go live and perform their collaboration – Cookie, Lucious, the rest of the Empire staff watch from behind the scenes. Cookie raves that Jamal is back. Lucious scoffs that the “Kumbaya Crap” is killing their views. There needs to be some fire in the room.

Lucious takes Hakeem aside and stirs the pot, he tells him that Andre has been sleeping with Nessa. Obviously, Hakeem is upset, and he thinks that Jamal has been helping Andre hide it. Hakeem raps live, and disses Jamal and Andre. All hell breaks loose on the live stream and the Lyon Brothers begin fighting over Nessa, Cookie screams at everyone to turn the cameras off.

Becky and Xavier go behind Cookie’s back and have Tiana record a different song than what Cookie wanted. Becky thinks that she is doing Tiana a favor, but when Tiana learns what she did – she kicks her off her album team.

Cookie gets a surprise from Angelo – apparently he pulled some strings and the PO is loosening her reigns. It turns out that someone gave their office an incorrect tip about Cookie, they apologize for the misunderstanding. It looks like Angelo is a friend and not a foe, he’s a good buy to have in her corner after all.

fter the hot mess at Jamal’s house, Hakeem stops by Lucious’ house and helps him tuck baby Bella in to bed. Hakeem says that his dad was right after all, about Jamal. He encourages Hakeem to go to war against his brothers, and then shows him how to swaddle baby Bella. Lucious promises Hakeem that he is going to teach him how to be a “destroyer of souls.”