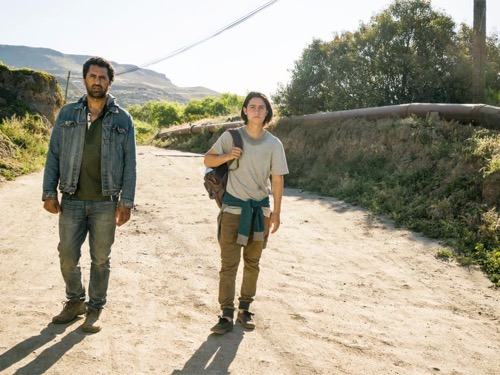 On AMC tonight Fear The Walking Dead (FTWD) the spinoff of wildly popular TWD airs with an all-new Sunday, September 4, 2016, episode and we have your FTWD Recap below!  On tonight’s episode called, “Do Not Disturb,” for the first time since the summer premiere we get to see Chris (Lorenzo James Henrie) & Travis (Cliff Curtis) again as they seek shelter.

If you missed last week’s episode of FTWD which concentrated on Nick (Frank Dillane) and how his search for answers lead him into a deadly dog-eat-dog landscape we have a full and detailed Fear The Walking Dead recap, Right HERE!

On tonight’s episode as per the AMC synopsis, “Alicia (Alycia Debnam-Carey) meets a lonely woman with a bloody past.  Meanwhile, Travis tries to reconnect with a troubled Chris.”

Season 2 is shaping up to be a great season and you aren’t going to want to miss any of the unfolding action tonight. We’ll have your Fear The Walking Dead recap of season 2 episode 9 right here for you at 9 PM. In the meantime, check out all our FWTD news, spoilers & more, right here!

Who is the biggest danger? Find out on the next #FearTWD, this Sunday at 9|8c. https://t.co/s3CAZDyBAd

Tonight’s episode opened with a romantic wedding scene that took place at the hotel where Madison, Victor and Alicia are trapped. The mother of the bride warns a manager there that the sickness is spreading. During the father, daughter dance, the father falls to the ground before transforming into a zombie. The hotel manager and her help go running, locking the people in the room.

Chris and Travis have been walking forever. Travis is exhausted, tripping over his own feet. They decide to look for shelter. They find a car, smashing the window. Chris wants to go see about a restaurant in the distance. He promises to be safe. Travis lets him go.

Chris makes his way into the restaurant and runs into a group of infected and guys that are alive. He grabs supplies and runs for it. Travis manages to get the car running, the two take off. Chris asks to drive. Travis finally lets him. He teaches him how to drive.

Alicia is peering through the peep hole of a door, She’s taking stock of how many of the infected are walking by as she swings her knife.

Travis and Chris run out of gas on the side of the road. They build a fire, keeping close to one another as they eat canned food. They talk about the good old days, when they camped, fished and ate smores. They contemplate heading up into the mountains where the dead might be scarce. Chris questions their plan, he’s nervous. Travis wants to head to somewhere elevated, where they can see something coming.

A truck comes. Chris kills the fire. They run and hide in the woods as flashlights make their way towards them. It’s the guys from the restaurant. They announce that they aren’t looking to hurt them. The guys are impressed by Chris’ fighting earlier. Chris points out to the guy that he saved his life – he owes him.

Alicia is looking around outside on her balcony. She finally comes out of the room as a group of infected chase her. She manages to open the elevator and jump down the shaft as the dead reach for her. She holds on to the cables as they fall down on top of the elevator. The hotel manager from the wedding appears and helps her.

Chris and Travis sit with the guys around the fire. The 3 were camping when the outbreak came and they have been trying to get home ever since. Travis tells them that LA and San Diego are gone.

The guys want to learn how Chris learned to kill. Chris has been counting his kills. Travis explains that he knows how to fight because of necessity. The guys want to join up with Travis and Chris. Travis politely tells them that they will be on their way out in the morning.

The manager is keeping Alicia hostage in a room. She wants to know where Hector, her nephew is. Alicia explains that she has no idea. The manager tells her that there a dozen guests still living in the hotel and she has keys and access to every room. Alicia tries to reason with her, get her to help her find Madison.

They can team up.

Chris wants to join the guys while Travis doesn’t think it’s a good idea. He isn’t willing to budge on the matter.

Alicia and Elena, the hotel manager, team up and lure the dead to a balcony. Alicia goes out on to it and makes her way to the next room over with a sheet thrown over the ledge by Elena. The dead begin to build on the other side, putting so much force on the glass it begins to crack. They spill out and over the balcony.

Alicia and Elena make it out of the towers. Elena sees the rest of the hotel for the first time. She admits to Alicia that she locked them in with Hector. She thought she was doing the right thing. Now everyone hates her. Alicia promises that no-one is going to touch her.

Travis and Chris take a ride from the 3 guys. They are headed to the next town over. One of the guys tells Travis that the 3 of them are gods now that the outbreak has taken place. They stop to check out a farm. The cupboards are bare. Travis wants to stay there. He wants to make it home, but Chris doesn’t want to. He wants to be a part of a group.

Alicia and Elena spot a room full of the infected that is barricaded by chairs. Alicia thinks her mother is in there. When she starts to pull the chairs away, a group of survivors in the hotel appear with a hostage. They’ll tell her for the keys. She tells Elena not to give them up, not until she knows what happened to Madison.

Alicia knows that Madison is alive. The group wants to keys in exchange for Hector. Alicia tells her to do it and they run.

Meanwhile, the farm house owner is alive. He wants them to leave, threatening them with a shot gun. The 3 guys aren’t budging while Travis yells at Chris. Chris shoots the farm owner after he shoots his friend.

In the seconds that remain, Alicia finally finds her mom.