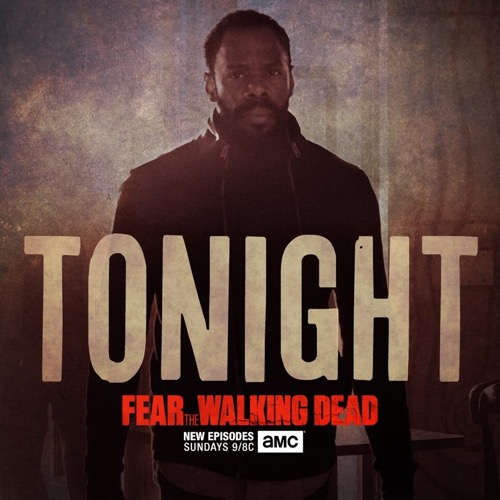 Fear The Walking Dead continues on AMC tonight with all its gory goodness with an all new Sunday, August 28, Season 2 episode 9 called “Los Muertos” and we have your weekly Fear The Walking Dead recap below. On tonight’s episode, after the fall of the compound, Madison, (Kim Dickens) Strand (Colman Domingo) and others forge a tenuous path forward.

On tonight’s episode as per the AMC synopsis, “after the fall of the compound, Madison, Strand and others forge a tenuous path forward. Meanwhile, Nick is recruited for a perilous assignment.”

You aren’t going to want to miss any of the unfolding action tonight and neither do I. We’ll have your Fear The Walking Dead recap of season 2 episode 9 right here for you at 9pm. In the meantime, hit up the comments and tell us what you’re expecting from the season 2 episode 9. Who do you think is going to die tonight, any major characters or just the regular walkers.

Nick wakes to a woman coughing after staying the night in the community that is located up in the hills. It’s quiet with only a girl crying as she looks on to see her father giving himself to the leaders. They hug him goodbye as he walks onto a large bus.

The doors close and he is forced to walk to the back and give himself up to a heard of zombies while the people from the community chant. Nick shades his daughter from the view.

Meanwhile, the gang makes it to safety with Madison jumping from the back of the truck. She is clearly looking for Travis. It’s been 2 days. She is determined to find him while the others warn her that they need to go back.

In the community compound, Nick meets with more of the others. He sees the doctor who saved him treating the elderly and the sick.

Madison and the others begin to look for shelter, something Madison isn’t ready to do yet. She wants to keep looking. Before they leave, the write a message in the sand for Abigail.

They see what could be a safe haven, watching too for movement.

Madison and the gang make their way into the large building that has been barricaded from the inside. Who locked the place down and where are they now?

It looks like the place is a hotel where a wedding was going to take place. There is a cake and decorations left behind, a morbid scene that makes the gang more distraught.

Nick wants to know why the man was let out through the bus. The people believe that he gave his life as protection for the others. It’s a cleansing of sorts in their ideas. A truth they all believe that Nick is hesitant to join in.

Victor wants Madison to relax, to have a drink while the others hunt for food.

Nick and his savior head out of the compound on a trip to find water. They meet up with a gang of guys who Nick calls out. She gets angry and hopes that they do not follow them back to the compound.

Madison and Victor sit and talks for a while. Madison is sure that she will never see Nick again – he is just like his father. His father had a darkness. If she leaves him alone, he is bound to die.

Madison discusses how her husband died and how she keeps trying to save Nick.  She keeps drinking against Victor’s advice. She wants to drink to motherhood and false hope.

Alicia has showered and cleaned up. She goes to look for Ophelia. She can’t find her. Looking outside the window, off the balcony, Alicia sees zombies falling from parts of the building.

Ofelia is missing. Everywhere she runs, Alicia comes to see zombies. She screams for Madison.

Nick brings back a gift for the little girl who lost her father.

Nick questions the doctor about the death of the girl’s father.  The doctor explains that they are running out of medicine. Nick confronts him about his beliefs. He is warned that if he questions their ways, he will be fed to the wall.

A drunk Madison and Victor finally realize that they are surrounded by zombies. They fight them off with chairs, bottles, anything they can get their hands on. They are backed into a corner while Alicia is also frozen in another part of the hotel.