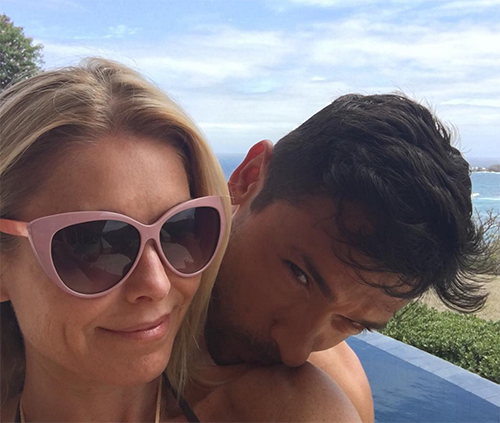 Fans of “Live! With Kelly and Michael” are eager for Kelly Ripa’s return to work on Tuesday, April 26 after her sick-out in protest of Michael Strahan’s blindsiding announcement: he’ll be moving to “Good Morning America.” But what will the vibe be like on the set? Can we expect a distinct chill in the air?

Michael Strahan may have tackled thousands of NFL opponents as a Giant’s defensive end – but we can bet he’s never faced the rage of a tiny woman like Kelly Ripa. And really who can blame Ripa for her fury? This is the second time she’s been betrayed by a co-host departure blindside.

Regis Philbin reportedly told Ripa that he was leaving the show a mere 20 minutes before he made the announcement to the Live! audience. That seems like dirty pool when Philbin did it back in 2011 and now Kelly Ripa had co-host treachery déjà vu a mere five years later with Michael Strahan.

In his defense, sources say that Michael Strahan was under a gag order from ABC not to inform his co-host. However, Ripa’s former co-host Regis Philbin told TMZ that ABC “should have told her from the beginning” rather than doing an end run on the former soap star again.

After the stunning GMA announcement, Kelly Ripa cried foul and decided to bench herself for the rest of the week of shows – and who can blame her? What makes this worse is that the media machine at ABC may have been churning negative press about her.

There has been talk of her being a diva and that her sick-out could get the crew of Live! fired, which makes her out to be more villain than victim. It’s also hard to generate sympathy for Ripa when she’s raking in $15-$20 million a year co-hosting the show.

But the bottom line is, it sure seems like ABC takes her for granted. On the flip side, we have to wonder where Kelly Ripa could go and make that kind of bank with her skill set. As a former soap actress, she might get work on a sudser, but for a paycheck 100 times smaller (or less).

And how will Kelly Ripa and Michael Strahan play this when they’re both on set together tomorrow shooting Live!? Will they make a joke about her feeling better since she was “sick” or will they take ABC’s cover story of a “vacation” and he’ll ask about her spur of the moment trip to Turks and Caicos?

What we can likely expect is big smiles and banter like nothing is wrong – at least while the cameras are rolling and arctic chill when there’s no audience there to observe them. Regis Philbin revealed that even though he and Kelly Ripa co-hosted Live! for 11 years, they have not talked since his departure.

That’s a sure sign that she did not take well to what she likely sees as utter betrayal. Michael Strahan should not expect to remain on Kelly Ripa’s Christmas card list – if he ever made the cut to begin with – after ditching her for GMA without a heads up between colleagues.

Also of interest is that Strahan was reportedly not well-liked by Good Morning America when he first started on the show part-time back in 2014 – according to Radar Online – and there have been many negative fan comments since his full-time casting announcement was made.

No doubt Kelly Ripa will have a new co-host soon and let’s hope it’s someone that won’t do her dirty this time. Fans loved when her hubby Mark Consuelos sat in Strahan’s chair and Andy Cohen has been mentioned. Cohen adores Kelly, but his Bravo work keeps him too busy to take the co-host chair.

What do you think? Who do you want to see take Michael Strahan’s place at Kelly Ripa’s side? Do you think she was right to take a week off in protest after the GMA blindside? Share your comments below and check back with CDL often for more celebrity news.