Game of Thrones LIVE Recap: Season 6 Episode 8 “No One” 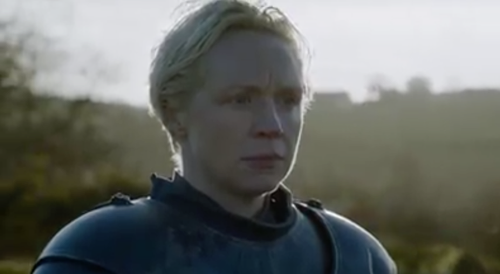 Tonight on HBO, Game of Thrones is back with an all new Sunday, June 12 season 6 episode 8 called “No One,” and we’ve got your recap down below! On this evening’s episode, Brienne (Gwendoline Christie) confronts Jaime (Nikolaj Coster-Waldau) during the siege at Riverrun; Cersei Lena Headey)  delivers a defiant response.

On the last episode, Jaime encountered a hero; the High Sparrow fixated on another prey; Arya hatched a new plan; Yara and Theon plotted their next move; Olenna and Cersei discussed their families’ futures. Did you watch the last episode? If you missed it, we have a full and detailed recap right here for you.

On tonight’s episode per the HBO synopsis, “Brienne confronts Jaime during the siege at Riverrun; Cersei delivers a defiant response; Tyrion’s plan starts to come together; Arya is presented with a new challenge.”

Lady Crane is performing on stage. She cries over an actor portraying King Joffrey. After her monologue is done, Lady Crane exits the stage and returns to her quarters. She’s about to take a drink when she hears a rumbling in the closet. She checks it out. It’s Arya, badly wounded. Lady Crane takes Arya back to her home to patch her up. Crane wants Arya to come with her theater company, but Arya says she cannot, as she would be putting them all in grave danger. The Waif, an acolyte of the Faceless Men, will stop at nothing until Arya’s dead.

Meanwhile, the Hound is on a rampage.

Lord Varys and Tyrion walk through the city. Tyrion sees Varys off on a secret mission.

In King’s Landing, Cersei gets a visit from the Sparrows. Cersei’s cousin demands that Cersei go visit the High Septon. She denies the order and has the Mountain kill one of the Sparrows. The Mountain rips off the guy’s head.

Brienne finds her way into the Blackfish’s presence. He won’t back down. Brienne gives him Sansa’s note, but it doesn’t do much good in persuading him.

Cersei ventures into the Iron Throne room to listen to a royal decree. King Tommen sets a date for Cersei and Loris Tyrell’s trials, and he also bans trial by combat, which Cersei was banking on to ensure her freedom. Cersei looks worried; however, her maester tells her that he might have some more news regarding that “rumor” she had his “little birds” investigate.

In Meereen, the Masters approach in their ships. Apparently, they want their “property” back.

Jaime meets with Lord Tully. He tells him that he loves Cersei and that, if need be, he’ll kill every last Tully to get back to her.

Lord Tully asks for passage into Riverrun. The Blackfish says that it’s certainly a trap, and denies him entry into the castle, but he’s eventually granted passage. Lord Tully goes to the commander of the army and orders him to have his men lay down their arms and open the castle gates. His men do so hesitantly, and Jaime’s men proceed. Soon, the Blackfish is ordered to be put in chains.

Brienne and Pod escape during the siege. They tell the Blackfish to come with them, but he refuses and chooses to fight for his home – even though it’s a lost cause.

Daeny makes her return just as the slaveholders begin their siege.

The Hound finds the Brotherhood preparing to hang the members who murdered all those people. The Brotherhood allows him to kill 2 of the 3 men. Next, the Hound takes up camp with them.

Lady Crane checks on Arya in bed. Lady Crane goes to fetch some more medicine for the sleeping Arya. Before she can do so, she’s killed by the Waif.

Arya makes a run for it, but Jaqen’s disciple is hard to outrun and trick. They chase through the city. Arya gives her best effort. She falls hard and tumbles down cobblestone stairs. Her knife wound busts open. She hobbles away from the Waif, who tracks Arya into a cellar.

Arya stands on her feet and draws Needle. The only light in the room comes from a candle. Arya slices the candle in half. The room goes dark.

In the House of Black and White, Jaqen follows a trail of blood. In the chamber of Faces, he sees the Waif’s face in a one of the spots.

Arya arrives behind him.

“Finally, a girl is no one,” Jaqen says.

Arya leaves the House of Black and White.