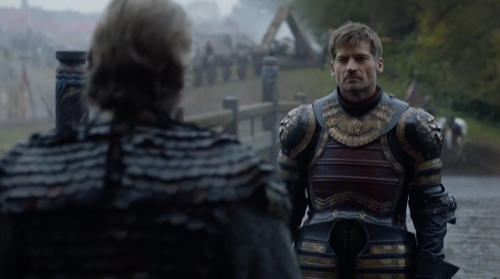 Tonight on HBO, Game of Thrones returns with an all new Sunday, June 5 season 6 episode 7 called “The Broken Man,” and we’ve got your recap down below! On this evening’s episode, Jaime (Nikolaj Coster-Waldau) encounters a hero; the High Sparrow fixates on another prey.

On the last episode, Hannah met Sam’s family; Arya mulled a difficult decision; Jaime confronted the High Sparrow. Did you watch the last episode? If you missed it, we have a full and detailed recap right here for you.

On tonight’s episode per the HBO synopsis, “Jaime encounters a hero; the High Sparrow fixates on another prey; Arya hatches a new plan; Yara and Theon plot their next move; Olenna and Cersei discuss their families’ futures.”

People are working hard on a wooden structure, overseen by The Broken Man. There, among the workers, is The Hound.

The Hound chops wood and the Broken Man comes to chat with him. The Hound says that a woman “cut him down.” He’s, of course, referring to Brienne of Tarth.

Margaery is reading the Book of the Mother, and the High Sparrow is pleased by how she has adopted the way’s of the Sacred Texts.

Olenna talks with Margaery about what’s “happened” to her. Olenna is furious with how her granddaughter has adopted this fanatic religion. Olenna demands that Margaery return to High Garden, as there’s nothing that says she must stay in King’s Landing. Margaery says that it is she who should be leaving. In fact, she commands it. Margaery gives her grandmother a note and, in the presence of a Sparrow, fills the room with variety of faithful wishes to see to a safe journey. Olenna recognizes something in her granddaughter’s voice, something that might suggest she knows EXACTLY what she’s doing and playing at in this new game she’s found herself in.

If there’s one thing Margaery values, it’s her family, and it’d be shocking to witness her do anything to go entirely against her family – especially her beloved brother, currently in the shackles of the Faith for being gay.

When Olenna exits her chambers, she unfolds the note that Margaery gave to her. On it, there’s drawn a rose, the symbol of their House – and perhaps a symbol of hope. Perhaps Margaery is about to pull one over on the High Sparrows and the Faith.

Jon Snow and the Wildlings rally their troops for their impending battle, which will hopefully result in them reclaiming the North.

Jaime and his troops approach Riverrun and begin their siege. Their goal is to take back the castle.

Meanwhile, Ser Davos, Sansa, and Jon try to persuade the Lady of Bear Island to join their fight to take back the North. She promises them 62 men. Jon is taken aback by the low count, but she says that each man fights with the strength of countless men. Davos says that if her men are half as ferocious as their Lady, then they have nothing to worry about and are grateful for her allegiance.

Jaime orders for the men to vacate the castle, as it belongs to House Fray.

Theon and Yara are currently on the run from their uncle, and they’re looking to get to Daenerys. She loves her brother a great deal, and she tells him that she’s tired of seeing her brother cower at everything. She tells him that she needs him – she needs him whole. She needs the real Theon if they’re to sail to Meereen and get the Dragon Queen’s help. She asks him if he’s with her. He looks at her and nods. Before they set sail, Yara gets up. She finds a lovely lady prostitute and walks away.

Sansa and Jon talk in their encampment. Sansa pushes that they rally more men for their army, but Jon says that they’re to fight with the men that they were given.

Later that night, she prepares a note for someone. She presses her House seal into the wax and smiles.

Meanwhile, the Broken Man is telling his people a story. He gives off the energy of a cult-like leader, and he wears a Seven Pointed Star amulet.

In Braavos, Arya is looking to book safe passage home. She hands over a satchel of gold. She tells the man that she wants a cabin on his vessel and that they’ll leave at dawn.

As she looks over a bridge, an old woman comes up to her and says, “Sweet girl.” The woman grabs her and stabs her multiple times in the stomach. The old woman removes her mask. It’s Jaqen’s disciple. Arya frees herself from her clutches and jumps over the bridge. All bloody, she lands in the water. She finds her way out of the water and walks through the city. She’s wet, cold, shivering, bloody, and nobody pays her any attention.

The Hound returns to the camp only to find the Broken Man having hung himself and all his followers dead.