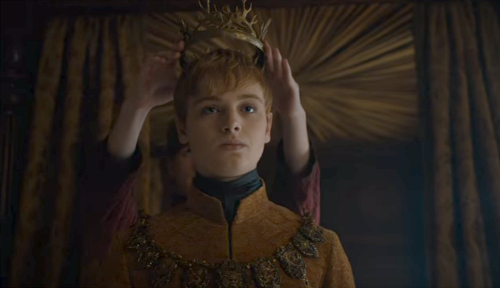 Game of Thrones spoilers for Season 6, Episode 10 “Winds of Winter” reveal that although the season has had a brutal body count – the murder is not done yet. In the season finale, we’re expecting # more deaths. Here’s a look at who’s already kicked the bucket in Season 6 and the five who are about to die!

Named characters killed off in Season 6

If you’re keeping track, there were about 30-ish named characters, major and minor, that met their ends in Game of Thrones Season 6. Whether these citizens of the GoT realm believed in the Old Gods or the New, they’ve met their respective makers.

Some of these characters will be missed, some had fans cheering as they were brutalized (dog chow, anyone?) and some we saw so briefly that they were but a blip on the radar. Here’s a quick rundown before we get to the season finale slaughter. 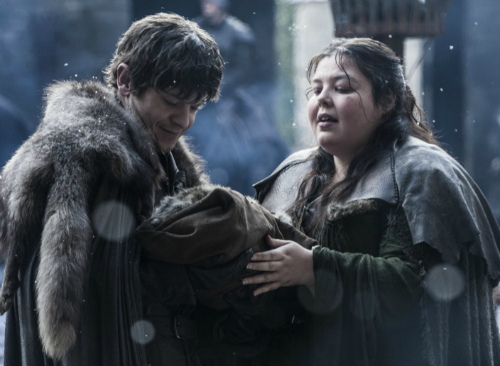 Ramsay Bolton (Iwan Reoh) died in the best possible way – eaten by his dogs as he’s served up so many before. GoT fans were cheering as he became human Alpo.

Wun Weg Wun Dar Wun (Ian Whyte) was a big death, literally and figuratively since he’s the last giant. The big guy carried the day, crashed the gate, then died.

Smalljon Umber (Dean Jagger) we knew so briefly and so we didn’t care too much when he bit it in the Battle of the Bastards just before Ramsay met his end.

Rickon Stark (Art Parkinson) died in a horrid way compliments of Ramsay – shot in the back by arrows as he ran to brother Jon and was further desecrated in death.

Brynden “Blackfish” Tully (Clive Russell) died, as far as we know, but went down swinging his sword as the Frey and Lannister forces overtook Riverrun. 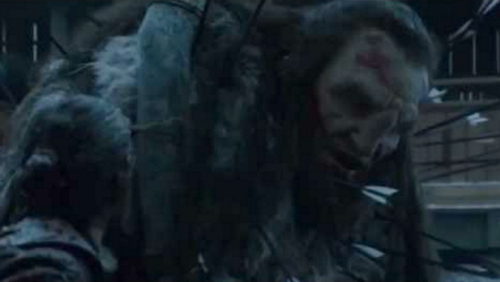 Osha (Natalia Tena) has dodged death many times as a wildling on the run, but Ramsay is just too evil. She was a good wildling and gone too soon.

Roose Bolton (Michael McElhatton) had a karmic payback coming as the architect of the red wedding so there can’t be too many that cared when Ramsay carved him up.

Walda Bolton (Elizabeth Webster) and baby met their end horribly thanks to Ramsay. The poor girl did nothing wrong but catch Roose’s eye because she was plump and her dad paid her weight in gold.

Leaf (Octavia Alexandru) sacrificed herself to buy time for Bran to get away but her people brought the White Walkers into the world, so it’s hard to feel too bad for her. 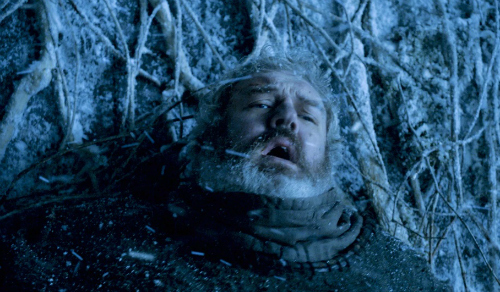 Hodor (Kristian Nairn) died protecting Bran but no one wanted to see him go particularly when we found out Bran was the one who broke his brain.

Brother Ray (Ian McShane) and crew died in a terrible manner but at least The Hound scored them some retribution.

Lady Crane (Essie Davis) died because The Many Faced God will not be denied but at least she lived long enough to help Arya heal up enough to take out Waif.

Waif (Faye Marsay) probably died too quick of a death considering how many she’s killed but at least Arya got to carve up her face and add it to Jaqen’s collection.

Razdal mo Eraz (George Georgiou) and his fellow master will not be missed either. These are the guys that rolled up on Dany trying to smack her down then bit it in a bad way. 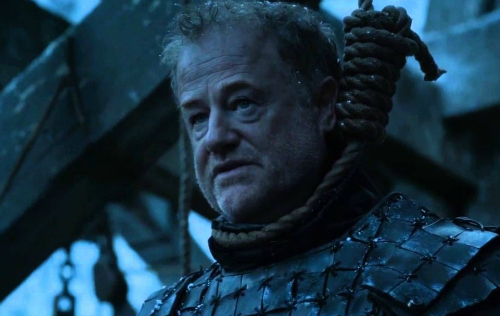 Balon Greyjoy (Patrick Malahide) was not a great dad and was always big on paying the Iron Price for things so it seems like he went out as he lived – the hard way.

Moro (Joe Naufahu) and other Dothraki males died when Daenerys Targaryen (Emilia Clarke) set the place on fire literally and burned down the meeting hall.

Jon Snow (Kit Harrington) was technically dead for some part of Season 6 even though the Lord of Light, compliments of Melisandre (Carice van Houten), brought him back.

Alliser Thorne (Owen Teale) has been cruising for a bruising since we met him back in Season 1, so it was with great satisfaction we saw him and his other co-conspirators swing. 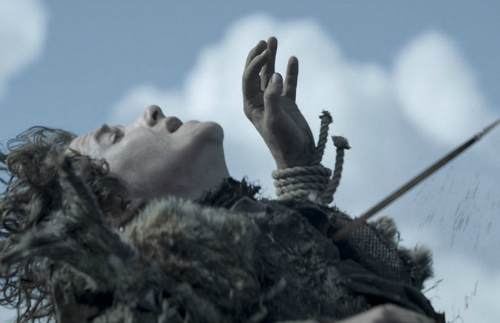 Trystane Martell (Toby Sebastian) was another dude who fell prey to some of the most dangerous GoT ladies – the Sand Snakes.

Doran Martell (Alexander Sittig) was murdered as part of the Sand Snakes killing spree because they felt he was too weak.

Myrcella Baratheon (Aimee Richardson) was probably the most innocuous of all the incestuous Lannister twin offspring so of course, she had to die.

Plus, so many more! That’s 30-ish names we knew and then a literal mountain of bodies lost in the Battle at Winterfell plus all of Brother Ray’s people, the guys that Sandor Clegane (Rory McCann) helped hang, and some others that Arya Stark (Maisie Williams) took out.

The bottom line is that it’s been a veritable casket-fest in Westeros, Braavos, Meereen and other locales in Season 6. And the fun is not done yet. In fact, we may see a bunch of King’s Landing citizens face their doom in the finale.

Game of Thrones spoilers reveal at least five deaths are coming in Season 6 Episode 10, but there may be more. GoT likes to treat fans to an embarrassment of riches when it comes to body count. Here’s the five we’re expecting and the more that may come. 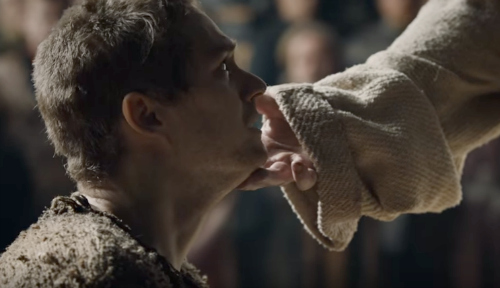 #1 Loras Tyrell (Finn Jones) will likely die in the Sept. Whether he kicks the bucket as a punishment from the Faith Militant or dies another way is not yet known.

#2 Margaery Tyrell (Natalie Dormer) may go out at the hands of the Militant if she also faces trial, or could fall prey to Cersei, or burn up in the expected fire.

#3 Tommen Baratheon (Dean-Charles Chapman) is rumored to die at the Red Keep jumping out a window. Is it suicide or is he running from the wildfire?

#4 Septa Unella (Hannah Waddingham) is the one who likes to ring her bell and says “shame” so when she’s crushed by Franken-Gregor (Hafþór Júlíus Björnsson), who will care? 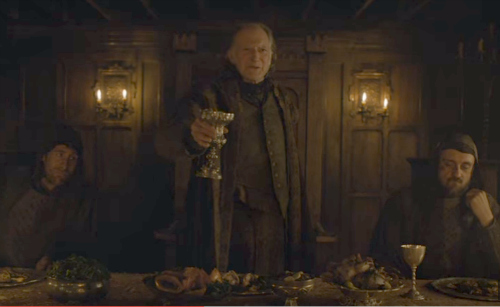 The Freys may be killed off by Jaime Lannister (Nicolaj Coster-Waldau) now that the Riverrun matter is settled. Will Jaime do a red wedding 2.0 and take out the Freys at The Twins and install Bronn (Jerome Flynn) to rule the all-important crossing?

The Worshippers of the Faith Militant may die when they show up for the trials of Cersei and Loras if Cersei ignites the store of wildfire that Aerys Targaryen left under the Great Sept of Baelor. If so, High Sparrow (Jonathan Pryce) may meet his maker as well.

The citizenry of King’s Landing will be at risk if the Game of Thrones spoilers about Cersei Lannister’s (Lena Headey) are true. Lots of sites have talked about Cersei kicking off in the finale but she just got a raise and she’s evil – and only the good die young in Westeros…

What do you think GoT fans? Do you agree with these likely death reveals for the finale? Share your comments below on these GoT Season 6 finale spoilers. Be sure to check back with CDL for a LIVE recap of the Game of Thrones Season 6 Episode 10 “Winds of Winter” finale on Sunday, June 26.