‘Games of Thrones’ Spoilers: Season 6 Episode 8 ‘No One’ – Arya Fights Back – Cersei Takes a Stand – The Hound Killing Spree 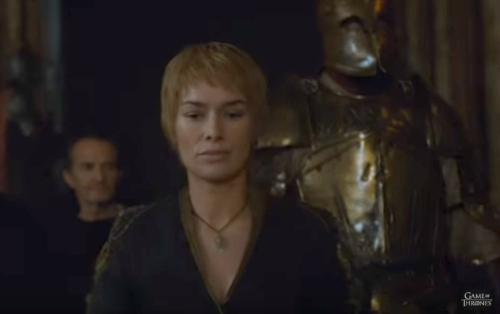 ‘Game of Thrones’ spoilers for Season 6 Episode 8 ‘No One’ airing Sunday, June 12 reveal an end to Arya’s time in Braavos, Tyrion makes a big move in Meereen, the Hound is back to his killing ways, and Cersei finally shakes off her fear and goes on the offensive.

Cersei Lannister (Lena Headey) faces off with Lancel Lannister (Eugene Simon), her former lover, as he and some other Brothers come to the castle. Lancel tells Cersei to have her men step aside or face violence and she chooses violence.

Unfortunately for the Brothers, Franken-Gregor (Hafþór Björnsson) is with her and is a killing machine. Wonder how many of the sparrows that Ser Strong will take out before they get wise and flee…

Also back this episode is creepy Qyburn (Anton Lesser), the Dr Frankenstein of Westeros. He’s been one of Cersei’s main co-conspirators while Jaime was gone. Can his dark Maester powers help her defeat the High Sparrow?

We see Cersei, Qyburn, and Ser Strong head into the sept, is this for her “trial” where she sets the High Sparrow (Jonathan Pryce) up? Cersei gets lots of side looks as she enters with her creepy entourage. Who will win the next round of Cersei vs Sparrow? 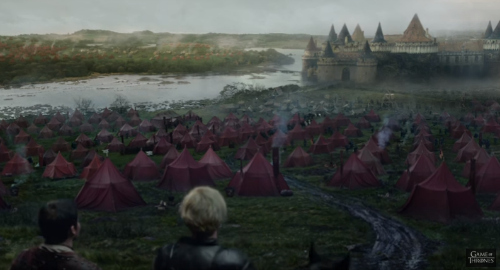 Brienne of Tarth (Gwendoline Christie) shows up at Riverrun seeking men to help fight with the Starks but she and Podrick Payne (Daniel Portman) find it under siege. Brienne faces off with one-time traveling companion Jaime Lannister (Nicolaj Coster-Waldau).

Can Brienne talk sense to the Blackfish? In the books he escaped via the river and ran off, but will he join Brienne instead? A clip from the Episode 8 trailer shows Brienne lurking in a boat so she may help sneak the Blackfish out so he can go to his niece and nephew in the North. 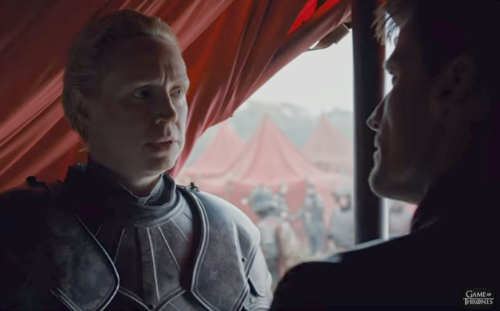 Flynn (Ricky Champ) is one of the outlaw band that killed off Brother Ray( Ian McShane). The Hound (Rory McCann) is angry and hunts down the bandits and attacks. Thoros (Paul Kaye) is also back – he’s the red priest that resurrected Beric time and again.

Arya Stark (Maisie Williams) will have to deal with Waif (Faye Marsay) if she’s to get out of Braavos alive and there’s a rooftop Parkour chase. No matter how it goes down, Arya survives and gains passage on a ship – likely back to Westeros and the remaining Starks.

Tyrion Lannister (Peter Dinklage) meets with Kinvara (Ania Bukstein), the red priestess, and wants her help to preserve Daenerys Targaryen’s (Emilia Clarke) reign in Meereen. Varys (Conleith Hill) doesn’t like her and this may drive a wedge between him and Tyrion.

Bran (Isaac Wright) gets some critical information – will we finally see the Tower of Joy reveal – he will end his journey and be delivered to the wall soon but will he go on to Winterfell to meet his kin? Will we have a Stark reunion by season’s end?

We’ll also see Jon Snow (Kit Harrington) and Sansa Stark (Sophie Turner) get their forces ready for the fight in Episode 9 ‘The Battle of Bastards.’ The action will continue to ramp up on GoT as we head into the last three episodes of Season 6.

Be sure to share your comments below and check back with CDL every Sunday night for a LIVE recap of ‘Game of Thrones.’