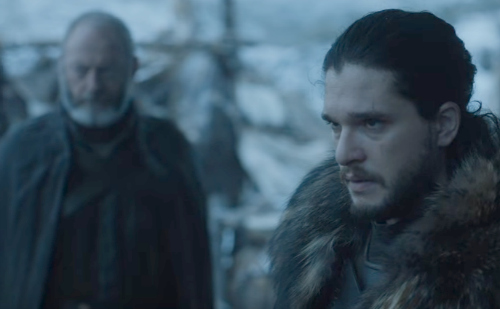 Benjen Stark (Joseph Mawle) delivers Bran Stark (Isaac H Wright) and Meera Reed (Ellie Kendrick) safely back to The Wall but then takes off. In the interim, Bran will have another of his mind-walking moments and we’ll see what went down in the Tower of Joy.

Most GoT spoilers indicate we’ll learn that Jon Snow (Kit Harrington) is the son of Lyanna Stark – not Ned Stark (Sean Bean). Lyanna will whisper something to her brother Ned who takes the baby and then we see that it’s Jon Snow who is both a Stark and a Targaryen.

There will be a battle for Winterfell and it gets ugly. The upshot is that Ramsay Bolton (Iwan Rheon) drags Rickon Stark (Art Parkinson) to the battlefield and tells Jon that his brother doesn’t have to die. Ramsay tells Rickon to run and he fires arrows as the boy runs to his brother.

‘Game of Thrones’ spoilers indicate that Jon will run to try and save Rickon but the boy will be impaled by one of Ramsay’s arrows just before Jon can get to him and will die in his brother’s arms (who is actually his cousin based on Tower of Joy reveal).

Sansa Stark (Sophie Turner) will tell Jon before the battle starts that their brother is “already dead” because the vile Bolton bastard has him. Jon’s army of Wildlings and Northerners will conquer Ramsay and his allies but Jon will elect to imprison Ramsay rather than kill him outright.

However, other GoT spoilers say that Ramsay will be eaten by his terrifying dogs an episode later and we have to wonder if it will be Sansa that sics them on her rapist husband. Fingers crossed it’s Sansa since he defiled her while Theon Greygoy (Alfie Allen) watched and later killed her little brother.

Reportedly, Rickon is the only Stark that perishes this season so that means Arya Stark (Maisie Williams) survives her showdown with Waif (Faye Marsay) who will be given permission by Jaqen H’ghar (Tom Wlaschiha) to kill her. Expect a gripping rooftop chase to the death!

Also, Davos Seaworth (Liam Cunningham) will find out the horrible fate of Shireen Baratheon (Kerry Ingram) when he finds a burned toy that the little girl always carried around and will confront Melisandre (Carice van Houten) who will admit she sacrificed his favorite Baratheon to the Lord of Light.

The finale is supposed to be chock full of character deaths and the leaked spoilers hint that teen king Tommen Baratheon (Dean-Charles Chapman) will take his own life by jumping out a window but as to why he would take that extreme action has not been revealed.

What do you think of the spoilers for the remaining episodes of GoT Season 6? Share your comments below and be sure to check back with CDL for a LIVE recap of ‘Game of Thrones’ ever Sunday night.