BY Stormy Elizabeth on May 31, 2016 | Comments: one comment
Related : Game of Thrones, Spoiler, Television, TV 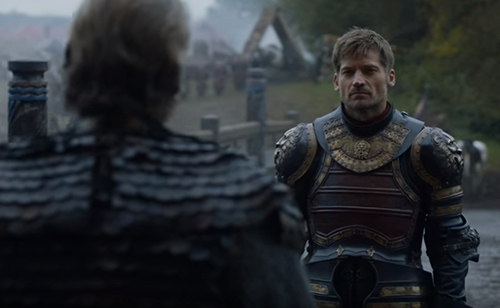 ‘Game of Thrones’ Spoilers for Season 6 Episode 7 ‘The Broken Man’ reveal that Jaime faces resistance, the Tyrells blame the Lannisters for everything, Sansa makes bold moves, Yara and Theon scheme, and battle plans consume the North.

GoT spoilers indicate that the High Sparrow (Jonathan Pryce) has a mission we don’t know about yet. Even though Margaery Tyrell (Natalie Dormer) is free, she and King Tommen (Dean Chapman) now seem to be pawns of the Faith Militant.

Olenna Tyrell (Diana Rigg) is furious and blames Cersei Lannister (Lena Headey). Olenna says their houses are facing collapse “because of your stupidity.” They’ll have to deal with the High Sparrow themselves since Tommen sent Jaime Lannister (Nicolaj Coster-Waldau) away.

Jaime will confront a hero – but who is it? He’s sent to Riverrun to break the siege between the Tullys and the Freys. Walder Frey (David Bradley), author of the Red Wedding, wants Riverrun desperately. Jaime will find himself trying to broker a deal or else do battle.

Brienne of Tarth (Gwendoline Christie) was sent to secure help from the Tullys for the war up North but that doesn’t seem likely. Lannisters and Frey soldiers are at the gates, but the Tullys have the castle. Brendyn Tully (Clive Russell) opens the gate to talk to Jaime.

Lothar Frey (Tom Brooke) threatens to kill Edmure Tully (Tobias Menzies) if his uncle won’t give up the castle, but Brendyn won’t. If all plays out as it did in the book, Jaime will finagle Edmure to talk his uncle into giving up Riverrun to spare innocent lives in the imminent battle.

GoT spoilers indicate a major battle scene was filmed that will air closer to the end of Season 6 and that it took a whopping six weeks to film. Some have theorized it’s the Riverrun siege, but it seems more likely it’s the North battle over Winterfell to roust Ramsay Bolton (Iwan Rheo).

Bronn (Jerome Flynn) is back and be at Riverrun with Jaime – it’s been a long time since we’ve seen Tyrion Lannister’s (Peter Dinklage) former BFF and man at arms. Looks like Bronn may get some face time with Podrick Payne (Daniel Portman), who’s with Brienne these days.

Up north, Tormund Giantsbane (Kristofer Hivju) reminds the wildling army that Jon Snow (Kit Harrington) literally died for them and they can do no less for him or else they are “cowards.” That fine speech will give Jon and Sansa Stark (Sophie Turner) an army.

Meanwhile, Davos Seaworth (Liam Cunningham) has his eye on the real enemy – the white walkers – and thinks these little power plays are meaningless when you look at the big picture and tells the Starks and their allies, “the dead are coming.”

GoT spoilers say the North is reminded and this likely has to do with a big move that Sansa makes. Ian McShane is also on the IMDB credits for the upcoming episode with no character listing, but spoilers hint he’s Septon Ray and may have The Hound (Rory McCann) with him.

Arya Stark (Maisie Williams) knows she is in big trouble with Jaqen H’ghar (Tom Wlaschiha) for not killing the actress and Waif (Faye Marsay) is coming for her. Since Arya has Needle back, let’s hope she finishes off the girl who loves to torment her.

Whether it happens this episode or next, spoilers reveal a major chase scene with Waif pursuing Arya across the rooftops of Braavos. Also in Essos, Theon Greyjoy (Alfie Allen) and Yara Greyjoy (Genna Whelan) are hiding out in in Volantis.

They make plans to get their revenge on Euron Greyjoy (Pilou Asbæk) while lurking just one peninsula away from Meereen, where Daenerys Targaryen (Emilia Clarke) is heading with the horde of Dothraki plus Drogon, her fully grown fire breathing dragon.

Looks like ‘Game of Thrones’ Season 6 Episode 7 ‘The Broken Man’ will be action-packed. Share your comments below and be sure to check back with CDL for a LIVE recap of the episode airing Sunday, June 5.