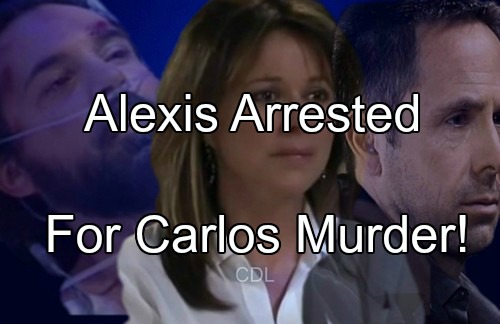 “General Hospital” (GH) spoilers tease that Alexis Davis (Nancy L Grahn) will be arrested soon. Could she be implicated in the stabbing death of Carlos Rivera (Jeffrey V Parise)? Did Julian Jerome (William deVry) set up Alexis to go down for his crime unintentionally?

Jordan Ashford (Vinessa Antoine) already has her eye on Alexis because of her proximity to the witness Hale because she was found with him just before he was pronounced dead. When Dante Falconeri (Dominic Zamprogna) notified Jordan of Hale’s death, she thought first of Alexis.

Jordan said that Alexis is either covering for Julian or actively helping him. So with the last obstacle out of the way – Carlos – GH spoilers say that Julian seems to be in the clear for Duke Lavery’s (Ian Buchanan) murder. Jordan may suspect Alexis of Carlos’ murder as well as Hale’s (even though it was ruled an OD).

General Hospital spoilers know that Paul Hornsby (Richard Burgi) will push Jordan to consider Sonny Corinthos (Maurice Benard) as the Carlos stabbing culprit. But Jordan may doubt that since Sonny wanted Carlos to testify against Julian. She’ll wonder why stab the guy that would get him to his real objective?

But if Paul finds out Jordan is considering Alexis, he might see that as an opportunity. Paul could try and implicate Alexis in giving Carlos the pen that was used to stab Dante so that attention won’t fall his way. And, importantly, Alexis’ dagger was used to stab Carlos to death.

Alexis had access to Carlos and could have slipped him the pen to make his escape. Of course, we know it was Paul that did it, but Paul could make Alexis look culpable. It makes sense – spring Carlos from jail then kill him so he’s not a risk to Julian ever again.

The dagger is a big problem. If the autopsy reveals that a unique weapon was used to kill him, that’s one piece of evidence. With Julian and Alexis being primes suspects in Carlos’ stabbing death, Jordan might get a search warrant (particularly if Paul helps it along) to search Alexis and Julian’s home.

That would turn up the dagger. Julian wiped it down, but that’s not a thorough cleaning. No way will wiping a dagger on a cloth get rid of trace DNA and blood evidence. And that dagger belongs to Alexis and her prints might still be on it even after Julian’s hasty wipe down since she’s handled it a lot.

Plus, plenty of people know that’s her knife. Lulu Spencer (Emme Rylan) knows she was left it in the will and probably told Dante about it. Plus, there’s everyone who was at the will reading. Time of death might be a problem since Alexis was with Sonny when Carlos was stabbed.

However, because Carlos went into the chilly water, that muddies up time of injury. Cold slows down the impact of a wound. Alexis came home then Julian left to go meet and kill Carlos. That sloppy timeline could implicate Alexis in killing Carlos BEFORE she came home.

Also, Julian might have an alibi from Nina Clay (Michelle Stafford). Nina could say that Julian was with her. She knows he had a bloody shirt but helped him get changed and enabled his to lie to Alexis about a wine spill. Other GH spoilers tease that Nina and Julian will become partners in crime.

Julian might lure Nina into covering for him. Franco (Roger Howarth) was there too when Julian showed up, but he’s not one to help the cops out. We also have to consider that the Port Charles cops are pretty sloppy. They don’t do the best police work…

While it’s terribly unlikely that Alexis would be tried and convicted of Carlos’ murder, it is entirely plausible that Jordan would jump to a conclusion and arrest her. Jordan already suspects her in Hale’s death and this second death adjacent to Alexis may be too much for the chief to ignore.

Fingers crossed that if Alexis is arrested, Diane Miller (Carolyn Hennesy) will be her lawyer and have her out of the PCPD lockup at light speed. May sweeps hint that Julian will be arrested at the Nurse’s Ball. We have to wonder what evidence will prompt that arrest and if it will stick.

Julian and Alexis are set for a major fight today that will carry over onto Monday May 16 that may end their relationship. If they split, we also wonder if Alexis would represent him once he’s arrested. Or will Alexis wash her hands of Julian for good no matter how much she loves him?

Share your comments below and be sure to come back to CDL often for more “General Hospital” spoilers.