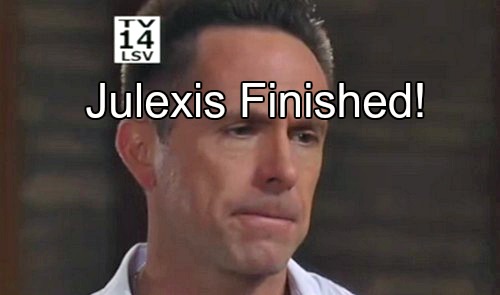 “General Hospital” (GH) spoilers tease that Julian Jerome (William deVry) has committed one felony too many for Alexis Davis (Nancy L Grahn) to tolerate and she and her mobster baby daddy will soon be on the outs. We’ll see a spectacular fight and some nasty accusations soon and then Alexis snaps.

It looks like Julian will once again be roomies with his sister Ava Jerome (Maura West) when Alexis puts him out of the house he bought for her. Whether or not Alexis plans his exit to be permanent is not clear but General Hospital spoilers say it looks like it won’t be too long before Julian has different roommates altogether.

After Jordan Ashford (Vinessa Antoine) get some additional evidence, GH spoilers say she’ll arrest Julian at the Nurse’s Ball. That should free up Ava’s guest room. But how long will Julian stay locked up? He seems to have a knack for evading justice so it’s hard to imagine Julian will end up in Pentonville for good.

But not only does Julian move in with Ava soon, but he’ll also being to explore a new relationship – with Nina Clay (Michelle Stafford). Whether it turns out to be romantic or not remains to be seen, but GH spoilers tease that Julian and Nina will be partners in crime and that seems to be what he needs.

In a way, Nina is the perfect gal pal for a mobster because she’s tolerant of the criminal aspect – as evidenced by her affection for former serial-killer Franco (Roger Howarth) – and would not lecture him about his mob-related activities. But is that what Julian needs? Someone to enable him?

Julian told PCPD chief Jordan that Nina can alibi him for the time of the Carlos Rivera (Jeffrey V Parise) attack. In fact, he was only there for a couple of moments before Alexis showed up, but will Nina fib and stretch the time to try and help him? She might do it – Nina’s definitely not a rat.

Plus, Nina helped Julian out of a bloody shirt knowing that’s what it was and that it could not have gotten there innocently. Then Nina stood by smiling while Julian told Alexis that big lie about spilling wine on himself. This sparks a few questions.

If Alexis is done with Julian, will he take up with Nina since she’s more tolerant of his lifestyle? If Julian can evade justice for the Duke Lavery (Ian Buchanan) shooting and Carlos stabbing, will he give up trying to pretend he’s clean and be the public face of the Jerome cartel?

Will Port Charles soon have two kingpins publicly active? There’s no doubt that Julian loves Alexis, but if he can’t get her to love him as he is and he can’t change who he is (a born mobster) they don’t seem destined to be together despite their obvious chemistry and affection.

Can Alexis and Julian get past this ordeal? Is Julexis done? Will Julian move on to someone who can accept him just as he is? Share your comments below and come back to CDL often for more “General Hospital” spoilers and news.