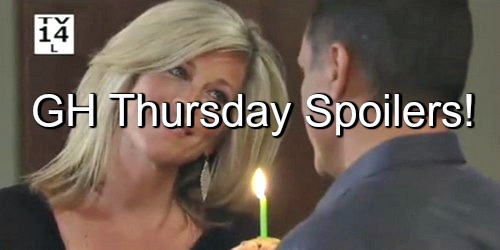 “General Hospital” (GH) spoilers reveal Sonny may be older, but not wiser on Tomorrow’s episode, Thursday, April 21, while Dr Obrecht faces opposition. GH fans see Ned and Olivia make a connection and Alexis is annoyed with two of her baby daddies. Here’s what you can expect on the next General Hospital.

Tracy Quartermaine (Jane Elliot) is thrilled with Dr Hamilton Finn (Michael Easton) as her doctor, but is not so happy when Finn tells her Dr Liesl Obrecht (Kathleen Gati) is making him leave GH. Tracy won’t stand for that and Monica Quartermaine (Leslie Charleson) gets pulled into it.

When Monica and Liesl have a chat, Monica gets an idea that could keep Finn around as both Monica and Tracy want. Ned Ashton (Wally Kurth) stops by and tries to figure out if his mom’s sweeter demeanor is a real change, a side effect, or an outright act.

Over at the MetroCourt, Ned will encounter his ex Olivia Falconeri (Lisa LoCicero) and get an update on her peaceful co-parenting with Julian Jerome (William deVry). Since her issues with Julian broke them up, is it game-on once again for Ned and Olivia? Fingers crossed!

As Carly Corinthos (Laura Wright) gives Sonny Corinthos (Maurice Benard) a cupcake with a candle for his birthday wish, we have to wonder what it is he wants most? Carlos Rivera (Jeffrey V Parise) and Julian to drop dead? Justice for Duke? What will Sonny wish for?

Julian and Alexis Davis (Nancy Lee Grahn) continue their chat about her repping Carlos for his murder trial, but then Julian’s probing questions get her hackles up and Alexis makes it clear that attorney-client privilege is in play.

Alexis will be irritated by baby daddy number two when she has a run in with Sonny who warns her to steer clear of Julian’s legal issues and Carlos’ trial. Look for Alexis to shut down that conversation too and refuse to hear anything Sonny wants to say.

Paul Hornsby (Richard Burgi) pops by the PCPD to tell Anna Devane (Finola Hughes) that bail is out of the question. No doubt Anna would be considered a major flight risk since she has international contacts as a former spy. Anna won’t be happy to see the dirty DA.

Dr Andre Maddox (Anthony Montgomery) is stunned when he hears from Jordan Ashford (Vinessa Antoine) that Anna has been arrested for shooting Carlos. GH spoilers reveal Andre does a psych evaluation on a prisoner at the PCPD.

Is this evaluation with Anna to set up a legal defense? Or was Andre meeting with someone else when he learns about Anna’s fate? Also, looks like Mac Scorpio (John J York) and Felicia Scorpio (Kristina Wagner) are worried about Anna and look for a way to help.

Don’t miss a moment of Thursday’s episode, April 21, on GH and come back to CDL for daily detailed “General Hospital” spoilers and news.