General Hospital (GH) Spoilers: Are Hayden and Liz Sisters – Naomi Dreyfus Revealed as Mom of Both? 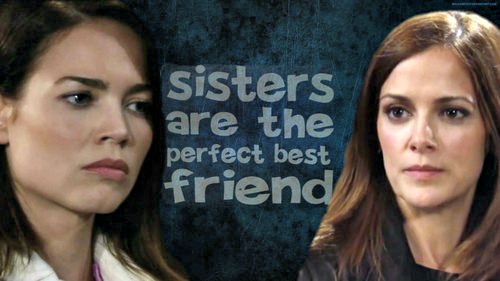 “General Hospital” (GH) spoilers tease that a new character will drop a major bombshell when she comes knocking at the door of Wyndemere on this week’s episode, Friday, June 3. Does Naomi Dreyfus (Robin Riker) have life changing news for Liz Webber (Rebecca Herbst) and Hayden Barnes (Rebecca Budig)?

Some recent GH spoilers hint that when Naomi comes to town, it’s not clear if she comes to Wyndemere looking for Liz or Hayden – or both. But why would Rachel Berlin’s mom need face time with Liz? General Hospital spoilers are swirling that Naomi is not only Hayden’s mom, but Liz’s mom too!

We know that Liz’s dad is Jeff Webber (Richard Dean Anderson) but her mother was mentioned just once. Jeff had three kids – Steven Webber (Scott Reeves) whose mother is Heather Webber (Robin Mattson) and also Liz and Sarah Webber, but their mother’s name – Andres Trent – was said in passing, and she may have been an adoptive mom, not biological.

It’s not clear whether Naomi shows up to claim Liz and Sarah both as her daughters, or just Liz. But it looks like Hayden and Liz will be hit with the harsh reality that they are sisters, despite their vitriol towards each other. No doubt Liz won’t believe this news, but perhaps Naomi has proof.

Liz’s dad is supposedly off in Bosnia being a doctor in war torn areas but he hasn’t been mentioned in a long, long time. Other GH spoilers tease that Liz will soon see her family expand. Since she’s not pregnant and not adopting, a mother and sister cropping up would fulfill the spoiler.

Robin Riker will debut as Naomi Dreyfus for a number of episodes but then will be absent from the screen for a while. When Riker took the role, she had a lengthy summer vacation already planned that GH showrunners are accommodating. So we’ll see her a bit now and then again in the Fall.

While Liz might be thrilled to finally spend time with her mother, it seems like she’d have a lot of questions for why she has been absent most of her life. Also, did Jeff and his wife adopt Liz? Clearly Hayden grew up with her mom Naomi, so Liz backstory must be more complicated.

According to GH age and birthdates, Liz is two years older than Hayden (although in real life, that age logic does not hold true for the two Rebeccas) and Sarah Webber is older than Liz. With that in mind, Naomi could have gotten pregnant with Liz (possibly also Sarah, although this is unclear).

Then Naomi could have left her one (or two) daughters with Jeff to raise while she ran off and got hitched to Raymond Berlin and had Hayden and her brother – we haven’t seen or heard about the younger brother yet, but he’s part of some GH casting spoilers that have been swirling for weeks.

The Naomi mom revelation would bring Liz not only a mother and a sister, but a half-brother as well if the show moves forward with casting Hayden’s brother. This will be a serious shocked for Nikolas Cassadine (Tyler Christopher) when he comes back from the “dead.”

But can Liz and Hayden make peace and bond as sisters? Will Liz be so thrilled to have a sibling in town that she’ll let the animosity go? Or will the sister reveal only make them hate each other more? After all, Hayden grew up with a mom while Liz did not… That might sting a little.

What do you think GH fans? Will you be shocked if Hayden and Liz are sisters? Do you think it’s a good twist for the show? How will this affect Liz and Hayden’s volatile relationship? Share your comments below and check back with CDL often for more “General Hospital” spoilers and news.