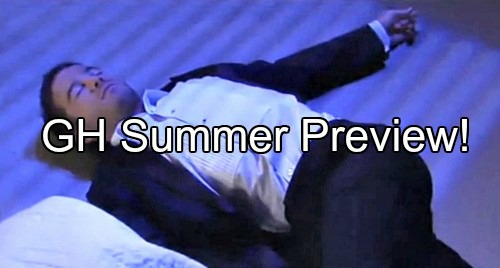 “General Hospital” (GH) spoilers show hot summer action, new romances, mysteries to be solved, new characters headed to town, and another wedding may fall apart before it can happen. Here’s a look at what’s coming to the ABC soap this summer.

GH spoilers tease that Jason and Sam learn more about Jake Webber’s (Hudson West) years on the island and that he spent time with a woman and her child. But who is the mysterious mum that spent time with Jake?

Also, did Nikolas set this whole scenario up to mess with his enemies or was he genuinely kidnapped? Turns out the Cassadine Prince is not dead, just missing. This adventure with Sam and Jason will also involve some other Port Chuck citizens along for the ride.

Hayden Barnes (Rebecca Budig) will be reeling from the news of Nikolas’ murder/disappearance when her mother Naomi Dreyfus (Robin Riker) shows up. Hayden wants her mom gone and Naomi’s presence will affect many lives.

Hayden gets closer to Hamilton Finn (Michael Easton) as he deals with his drama and she tries to make up for the sins of her father. Finn is a suspect in what turns out to be a serial killer investigation but others will also be under investigation.

Valerie Spencer (Brytni Sarpy) gets her cop stripes and helps investigate the General Hospital serial killings as her relationship with Curtis Ashford (Donnell Turner) heats up. A revelation about Jordan Ashford (Vinessa Antoine) causes Curtis to get closer to TJ Ashford (Tequan Richmond).

Claudette (Bree Williamson) has been cast and is coming to Port Chuck soon after she reaches out to Nathan West (Ryan Paevey) who tries to come clean to Maxie Jones (Molly Burnett or Kirsten Storms) but never quite spills all the beans. Good news is that Spinelli (Bradford Anderson) will be returning to Port Charles as well around that time.

Maxie wonders if Nathan is the man for her and takes a second look at Griffin Munro (Matt Cohen) but backs off when she doesn’t his ex-girlfriend. Spoilers are swirling about Griffin including that Claudette is his ex but also that he was involved with Anna Donely (Sean’s daughter).

Griffin’s connection to Nathan is finally revealed and there’s something in Griffin’s past that even he didn’t know about. Mistakes come back to haunt him and the sexy doc has challenges ahead. Anna Devane (Finola Hughes) and Griffin continue to bond.

However, Anna is focused on bringing down Julian Jerome (William deVry). Since he’s not in cuffs yet, is Alexis Davis (Nancy L Grahn) postponing telling the truth about her hubby? Paul Hornsby (Richard Burgi) continues to pursue an uninterested Anna.

Alexis meets a mysterious man who comforts her. Sonny Corinthos (Maurice Benard) works with Anna to get the goods on Julian. Michael Quartermaine (Chad Duell) finds his reunion with Sabrina Santiago (Teresa Castillo) interrupted by someone from her past.

Also, Tracy Quartermaine (Jane Elliot) doesn’t want to give Sabrina her baby back and is very attached to little “Edward.” Tracy works with an unusual ally to help Finn out of his serial killer mess at the hospital and he looks worse than ever and has more “fits.”

Ava Jerome (Maura West) and Sonny come to some sort of agreement over Avery and Ava is ready for romance and a new adventure with some people that aren’t her usual crowd. There’s a new man in her future but who could it be?

Nina Clay (Michelle Stafford) figures out what she wants and also hires Curtis to work for her. There are some spoilers that Nina might be in a new romance with Julian as he and Alexis fall apart, but nutty Nina may find a totally new target of her affections – not Franco, though.

Dillon Quartermaine (Robert P Watkins) gets closer to Kiki Jerome (Hayley Erin) but Morgan Corinthos (Bryan Craig) is an obstacle because Kiki still has residual feelings for him. Look for a summer-long triangle between these crazy kids.

Kristina Corinthos (Lexi Ainsworth) and her new pal Aaron (John DeLuca) open a business together and they get closer but Parker Forsyth (Ashley Johnson) is back and gets in the way of Kristina’s budding relationship with Aaron.

Molly Lansing (Haley Pullos) continues to be a thorn in Alexis’ side and meets a wild teenage boy who comes to town – this might be Paul’s son because other GH spoilers tease that Jenny Eckert, Paul’s ex, calls to ask him for a big favor.

Liz Webber (Rebecca Herbst) get a new house and is ready for love. Her friendship with Franco (Roger Howarth) deepens but she has concerns about his dark side. Franco wants to take things to the next step with Liz and if Jason stays gone for a while, it might happen.

Lucy Coe (Lynn Herring) starts up a scheme to lure Kevin Collins (Jon Lindström) away from Laura and calls someone in to help – likely Christina Baldwin – but the ally Lucy brings in takes Kevin and Laura’s side and that upsets Lucy as Kevin and Laura continue to get closer.

There are a bunch of big storylines that have some overlap but also take many characters off in different directions this summer. What do you thing GH fans? What will Sam and Jason find on the island? Where is Nikolas? Will Franco and Liz couple up?