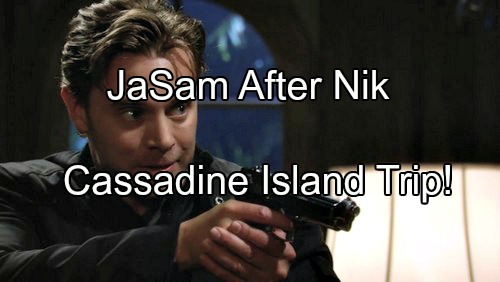 “General Hospital” (GH) spoilers reveal that the events playing out at Wyndemere will soon send Jason Morgan (Billy Miller) and Sam Morgan (Kelly Monaco) on a mystery mission. General Hospital spoilers say JaSam will head out of town, against the orders of Jordan Ashford (Vinessa Antoine), and it looks like their quest for answers will take them to Cassadine Island.

Jason and Sam initially think that Nikolas Cassadine (Tyler Christopher) is dead. Jason saw what looked like Nikolas’ broken body on the rocks of Spoon Island but when Jason ran down to help him, the body was gone. Jason and Sam assumed Nikolas was pulled into the water so Jason searched for him.

But if anyone knows that you can go into the waters of Port Charles harbor seemingly dead yet come back alive, it’s Jason. Jordan opens an investigation into Nikolas’ apparent death and her eyes are on two primary suspects – Jason and Hayden Barnes (Rebecca Budig).

GH spoilers say surveillance video turns up next week that put Jason in an unfavorable light. But when Liz Webber (Rebecca Herbst) reveals that Hayden and Nikolas were engaged in a battle over a fortune in diamonds, Hayden also looks bad. Jordan puts them both on notice that she’s watching them.

But is Nikolas really dead? Nah. Is someone playing games? There are some clues to consider. First of all, Spencer Cassadine (Nicolas Bechtel) doesn’t seem nearly as upset as he should be. Did Nikolas plan this whole shenanigan to take down his enemies but warned Spencer so he wouldn’t be upset?

Second, Nikolas may have filed the lawsuit against Jason over the ELQ stock purchase to establish motive for Jason to come kill him. Third, Nikolas may have staged the fall incident after he lured Hayden to Wyndemere by sending her the pic of the diamonds.

Did Nikolas set things up to cast a negative light on both Hayden and Jason for revenge? He wants rid of Hayden and truly hates Jason, so Nik could kill two birds with one body lying on the stones. Perhaps Nikolas is planning on closing down his life in Port Chuck by faking his death.

Could the prince be hiding out on Cassadine Island and planning to bring Spencer there later once all the drama dies down? But perhaps it’s not Nikolas at all. Remember someone was stalking Jason and Sam – was that Nikolas or another enemy of Jason’s that may also hate the Prince?

More GH spoilers related to this mystery include that when Sam and Jason take off on their investigative adventure, they will have unlikely traveling companions. Will Hayden go along because she’s also at risk and Curtis Ashford (Donnell Turner) tags along? How many will trek to Cassadine Island?

Also of interest are GH spoilers that some Jake Webber (Hudson West) info will be discovered while on the island including that a woman and her child spent time with Jake. Who could that be? Did Helena Cassadine (Constance Towers) use a surrogate to grow the Stavros-Lulu embryo?

What do you think GH fans? Did Nikolas fake his death or did someone actually assault him? What will Jason and Sam find on Cassadine Island? Share your comments below and check back with CDL for daily “General Hospital” spoilers plus more on the Nikolas mystery.