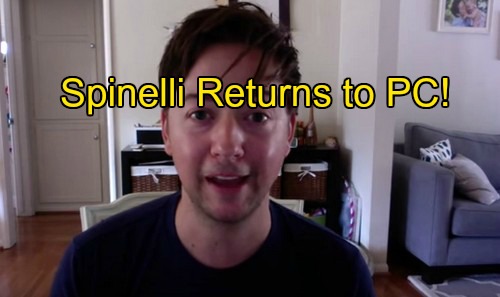 “General Hospital” (GH) spoilers tease yet another juicy casting scoop for the ABC soap opera. Damian Spinelli (Bradford Anderson) will return to Port Charles in a highly anticipated reunion with Maxie Jones (Kirsten Storms). There’s only one problem with that—Kirsten Storms is on a leave of absence (again) and will be exiting her role over the next couple weeks’ episodes. Kirsten will be replaced (supposedly temporarily) by Molly Burnett.

Many “GH” fans suspect that Storms will return to the role of Maxie in September; however, ABC has not confirmed that yet.

ABC has not released any General Hospital spoilers for Spinelli yet, so we don’t know the specifics of the storyline that brings him back to the canvas. We can assume it is related to Jason Morgan (Billy Miller) in some way, just because Jason has brought him back on the scene several times over the past few years. The only detail released about his return is that Ellie (Emily Wilson) will not be coming to Port Charles with him.

In a recent blind item, it was hinted that “General Hospital” could have some issues behind the scenes. It doesn’t take rocket science to put it all together when you consider Tyler Christopher’s and Kirsten Storms’ temporary exits  – and GH’s poor ratings.

The blind item stated that an executive producer is on their way out ad it is only a matter of time before they lose their job, reports Daytime Confidential. After the public debacle over Rebecca Herbst’s contract negotiations and fan outrage over a particular EP’s FB remarks insulting both the actress and GH fans it wouldn’t surprise many if the blind item was referring to him.

There is obviously a serious issue behind the scenes at General Hospital when both Tyler Christopher and Kisten Storms want to take “personal” time off at the same time – these are two major players involved in the most central storylines.

When they announced their exit from the show, many viewers wondered what was going on behind the scenes to prompt two of the key players to leave the show, even on a temporary basis.

Bradford Anderson should return in the next few weeks, perhaps by July, just in time to share scenes with Molly Burnett the all-new Maxie Jones, and Claudette (Bree Anderson).

Do you think the blind item about an EP being fired was referring to “General Hospital”? Are you excited about Spinelli’s return? Don’t forget to come back to CDL later for more spoilers, news, and updates.