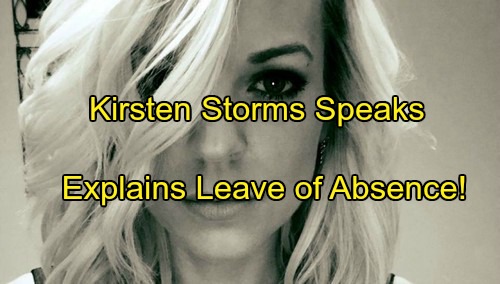 “General Hospital” (GH) spoilers hint there’s trouble ahead for Maxie Jones and Nathan West (Ryan Paevey) but it will be recast actress Molly Burnett (ex-Melanie, “Days of Our Lives”) that will have to play that storyline for now. And now Kirsten Storms is finally speaking out on the abrupt Maxie recast.

There has been rampant speculation about why Storms left with little notice. Many GH fans have expressed concern about Storms’ health since she took nearly a year of medical leave from 2011-2012. But Storms has finally explained, via a lengthy post on Twitter, why she had to leave the show this time.
Kirsten Storms shared on Twitter and Instagram:

“Tweeters! First, thank you for the outpouring of love & support. I appreciate the positive messages I’ve received (heart emoji) Second, yes I am taking a little break from work due to some skin issues I’ve been having. My dr’s say my breakouts are due to stress, but shouldn’t take too long to get under control. (I can say that I’m on the better end of it now) However, it was becoming too difficult for GH to coverup. And we all know in this biz appearance is important. In the meantime I look forward to seeing Molly on screen as I take the next few weeks to heal. Again – thanks for the love and you will see me again in no time!”

This tweet was her first in nearly a month. Since Storms is in the process of a divorce, stress seems like an inevitability, particularly since she and Brandon Barash share a young daughter. Prior to her divorce announcement, Storms was very active on social media.

Of interest is that Brandon Barash, Storms’ soon-to-be-ex, has been posting posting pics with their daughter Harper Rose Barash on a near-daily basis. Since Storms posted her Tweet, there’s been an outpouring of fan response with hundreds wishing her well and a speedy recovery.

This announcement is great news for GH fans because Kirsten Storms said her absence should only be for a few weeks and that she plans to be back to the ABC soap soon. What was especially nice in Storms’ announcement was that she gave a welcoming nod to her replacement Molly Burnett.

We also wish Kirsten Storms a fast and complete recovery and look forward to seeing her back as Maxie in time for all the upcoming drama with Nathan, Claudette (Bree Williamson), and Griffin Munro (Matt Cohen)!

Check back with CDL often for daily detailed “General Hospital” spoilers and news.