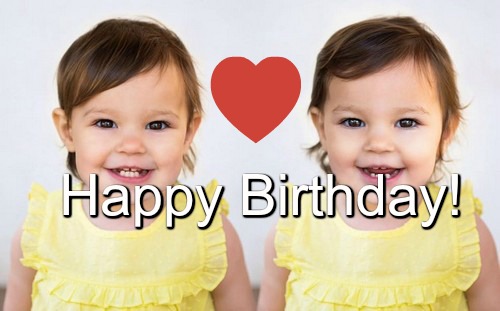 “General Hospital” (GH) spoilers reveal the bitter custody battle for baby Avery will heat up again soon but the battle for our hearts is already won by the tiny actresses that play Ava and Sonny’s daughter – twins Ava and Grace Scarola. The tots celebrate their second birthday today and are cuter than ever!

The little girls have shared screen time playing baby Avery since 2014 and it has been heart-meltingly adorable to watch them grow up on set. Despite the acrimony between Avery’s parents, Ava Jerome (Maura West) and Sonny Corinthos (Maurice Benard), the scenes with the little girls are always welcome.

Ava and Grace are now toddling and talking, throwing shoes and removing headbands and other parts of their costumes so it brings a real sense of fun to their scenes because you can’t control what a two year-old will do at any given moment but, all things considered, the twins are already pros at the soap game.

The twins have shared screen time on General Hospital with a lot of the cast given the custody battle between Ava and Sonny plus the one between Sonny and Michael Quartermaine (Chad Duell) while Ava was presumed dead. They seem to genuinely adore their grown-up costars and are always adorable and well-behaved.

Ava and Grace Scarola’s mom has a Facebook, Twitter and Instagram feed for the twins that’s really cute – check out @ScarolaTwins on social media. On March 1, for Maurice Benard’s birthday, their mom posted a video of one of the girls saying “Happy Birthday Mo” in honor of their on-screen papa. Too cute!

Trying to wrangle these three in a photo is comical … #scarolagirls A video posted by Ava and Grace Scarola (@scarolatwins) on Apr 15, 2016 at 6:37pm PDT

In another recent video their mom posted on Instagram, she showed what a challenge it is to corral Ava and Grace for a photo with their big sister. And today their mom shared their birth pic with the tweet “Two years ago we were blessed with these two beauties. Happy birthday, Ava and Grace!!!”

GH’s Maurice Benard seems to really adore the girls and even shared a link to a scene that didn’t make it into the show tweeting, “How dare they but Avery out of today’s GH but you can see it on…” and shared the video of one of his tiny costars grabbing his nose and smiling. 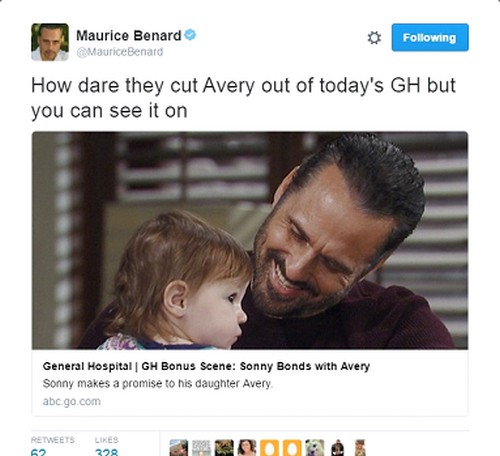 Ava and Grace Scarola are delightful in every scene and seem joyfully oblivious to the soap drama unfolding around them. We hope these two get to stick around the ABC soap for a long time and CDL wishes the Scarola twins the every happiest of second birthdays.

Be sure to check back with CDL often for more “General Hospital” spoilers, news and more!