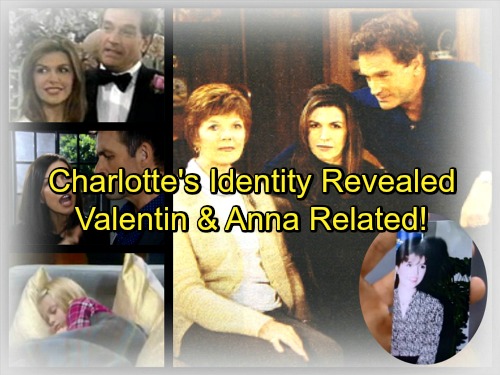 General Hospital (GH) spoilers sources have revealed some history that will blow fans minds. CDL may have solved the mystery of Valentin Cassadine (James Patrick Stuart) and in the process revealed who Charlotte (Scarlett Fernandez) really is too. We had to dig a little into the past, and even jump to All My Children, but there are far too many coincidences to ignore.

To begin: on General Hospital Thursday, November 3, 2016, we witnessed Valentin Cassadine (James Patrick Stuart) open a box he had locked in his safe revealing a folded picture of a much younger Anna Devane (Finola Hughes).

This, in itself, caused General Hospital spoilers speculation that Valentin and Anna were connected, or even related. Anna has said on more than one occasion Valentin seemed strangely familiar, here are some other facts that will make you believe how connected Anna and Valentin really are.

Fans of General Hospital spoilers and All My Children will remember that at one time, Anna Devane traveled to Pine Valley, where she met her twin sister, Alexandra “Alex” Devane Marick, and did everything in her power to protect Alex from crime boss Charlotte Devane (Samantha Eggar). At one point, Charlotte told Alex she was her mother, and they developed a loving bond until Alex learned the truth of Charlotte’s past and had her arrested.

Charlotte Devane’s power was great, and she continued to control things from behind prison bars. She placed a hit on super spy Anna Devane, who managed to avoid getting killed, but Duke Lavery’s (Ian Buchanan) nephew, Ryan’s (Cameron Mathison) wife, Gillian, wasn’t so lucky, and died from a gunshot to her head. It was believed that Charlotte Devane died in prison of a stroke, but there was no proof of her death.

General Hospital spoilers have established that Valentin is the son of Mikkos Cassadine, but hasn’t revealed who his mother is. Is it possible he is siblings with Anna, or are they cousins, and Valentin’s mother is crime lord, Charlotte Devane?

General Hospital spoilers tell us that this week Charlotte runs into Valentin’s arms filled with sheer joy at the sight of him. If this is any indication of how he is connected to her, then we can be sure he is the little girl’s father, and there is a good chance Charlotte was the embryo Helena Cassadine (Constance Towers) had kept in hopes of having a grandchild through her beloved Stavros (Robert Kelker-Kelly).

What do you think of the facts, are there just too many coincidences to ignore? Is Charlotte Devane Valentin’s mother and that is why he named the little girl Charlotte? Be sure to tune into ABC’s General Hospital to catch up on this story and many more. Check CDL often for General Hospital spoilers, updates, and news!