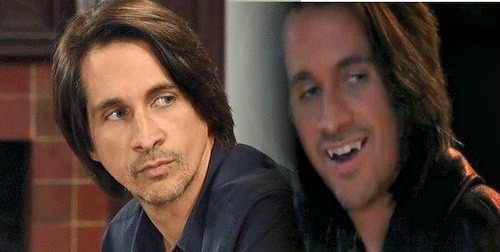 “General Hospital” (GH) spoilers reveal that Hamilton Finn (Michael Easton) is far more than he seems to be at a glance as we will learn on new upcoming episodes. Don’t let that service lizard fool you, Dr Finn is trouble with a capital T. In fact, Hamilton may be a Jekyll-Hyde monster ready to tear Port Charles a new one!

GH spoilers reveal that Jason Morgan (Billy Miller) has a new enemy coming to town looking for revenge plus General Hospital spoilers tell us Dr Finn is in town hell bent on revenge. This seems to point these two pivotal characters right at each other. Fingers crossed…

But even if Dr Finn isn’t targeting Jason, he’s obviously there to make trouble. Finn seemed so pleasant talking to Tracy Quartermaine (Jane Elliot) and playing with his lizard Roxie plus he has shown himself to be a competent physician and even a bit Zen in his actions.

But could it be that the bearded dragon and meditation are all to keep his rage quelled until he’s ready to let it loose? Remember when Finn went on a rant at Dr Liesl Obrecht (Kathleen Gati)? He snapped, got nasty and called her staff a “roaming pack of idiots.”

He was bubbling with thinly disguised rage and then tried to calm down but still looked murderous. Liesl even looked a bit shaken and she’s a bad chick herself so that’s foreshadowing what level of trouble that Finn may represent.

We also have to wonder if Finn himself may have somehow infected Tracy knowing that Monica Quartermaine (Leslie Charleson) might call him in – that seems a bit far-fetched but we’re talking about the show that brought you Fluke, so anything is possible!

After Finn’s moment of rage, he went back to his MetroCourt room and plumped up a vein then shot himself up with something in a syringe. It did not look like a recreational drug – Finn didn’t look like he was getting high – he looked like the drug got him back to normal…

There are some long acting anti-psychotic medications that are injected – not typically directly into the vein, but that would get the drug to the brain faster. If you look up the science on some of these meds like fluphenazine enanthate, it treats mental disorder with “loss of personality and reality.”

Of course, since Finn is a doc, he could have mixed up his own custom batch of anti-psychotic medications, but it seems like we are dealing with a guy who wants to appear one way, but is hiding something much darker – another side of himself.

General Hospital spoilers tease that when Finn is ready to make his move, will he ditch the lizard, Zen mantra and medications and let his freak flag fly? It seems strange that Finn would come to consult on a case then set up shop in Port Charles. That makes it seem more likely that he set up this scenario as an excuse to come there.

If Finn is in town for revenge, is he after Jason? Or could he be a secret Cassadine who’s been biding their time waiting for Helena Cassadine (Constance Towers) to kick off before making his move? Whatever Finn’s agenda is in Port Chuck, it’s clear that he has one.

He’s not just a lizard petting genius infectious disease doctor. We’re not saying he’s going to sprout Caleb Morley vampire fangs and start feeding on the locals – just that there is darkness in Finn that will become uncontrollable soon and he may just be Port Chuck’s next big bad.

What do you think GH fans? Is Finn hiding a dark secret? Is the rage he showed Dr Obrecht the real Dr Finn? Share your comments below and come back to CDL for daily “General Hospital” spoilers and news.