General Hospital (GH) Spoilers: Hayden vs Liz – Who’s Worse and Who Will End up With Nikolas? 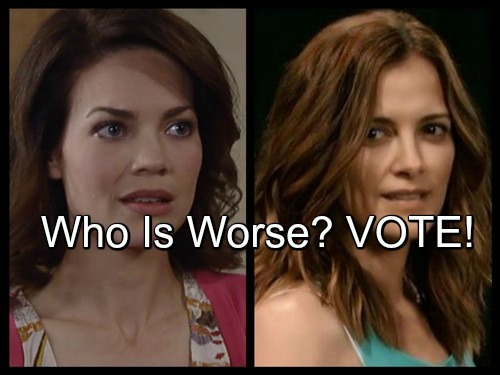 “General Hospital” (GH) spoilers reveal that the war of words between Liz Webber (Rebecca Herbst) and Rachel Berlin – Hayden Barnes (Rebecca Budig) is far from over as we will see on upcoming episodes this week and next week. Both have slung terrible accusations, but which one is the worst and which will win Nikolas Cassadine (Tyler Christopher)?

Of course, Liz hasn’t admitted that getting back with Nikolas is on her mind and keeps insisting to Hayden that they are “just friends” but we know that Liz can’t go long without a man and she and the prince have deep-rooted feelings for each other. But is Liz just as bad as Hayden? Let’s consider.

First, as far as we know of, Hayden has no kids. Liz, however, has three and as Hayden likes to point out, they each have a different baby daddy. Plus, Liz has been in a position where she wasn’t even sure who her baby daddy was, so that’s not good.

Also, GH spoilers remind us that Liz just came off a huge scam she was running on Jason Morgan (Billy Miller) aka Jake Doe. Liz lied to him for many long months about who he was and kept him from his wife and other son. Hayden, however, was lying about who she was, but wasn’t keeping any families broken apart.

But then again, Hayden also ran a scam on Jake Doe thanks to Ric Lansing (Rick Hearst) but she didn’t know anything much about her target so she had no idea what Jason’s real life was – she just knew it was to keep him apart from Liz – and they weren’t even dating at that point, right?

But now let’s look at motives. On this point, General Hospital spoilers show that Liz may have Hayden beat. Liz was acting out of love when she conned Jason – sure it was obsessive, but it was love. Hayden, always acts out of greed. She lost everything when her dad went bust and wanted back in the money. Falling in love was incidental.

An arena where these women are similar, though, is trauma and survival instincts. Liz was raped as a teen and that skewed how she deals with men. On the flip side, Hayden recently survived being shot by a guy she was sleeping with – that’s got to leave a mental and physical mark.

And when it comes to Nikolas, Liz’s hands aren’t as clean as she’d like us to believe. Sure Hayden lied to Nikolas about who she was, having amnesia, conned him into marrying her then drew up those legal papers, plus she’s been working behind his back with Tracy Quartermaine (Jane Elliot).

Liz has also had a complicated past with Nikolas including paternity questions, choosing his brother Lucky Spencer (Jonathan Jackson) over him, lies, betrayals, and a host of other less then pretty situations. Sure they have history, but a lot of it was bad news, infidelity, and disloyalty.

So which one is worse? Liz or Hayden? What do you thing GH fans? Hayden seems to truly love Nikolas despite all the intrigue but has Liz ever really loved Nikolas? Which one should Nikolas end up with? Or should he kick both to the curb and hold out for a decent woman like his Emily?

Share your comments below on the Hayden vs Liz rivalry and who you would like to see come out on top. And be sure to check back with CDL often for more “General Hospital” spoilers and news.