General Hospital (GH) Spoilers: Finn and Carly on a Collision Course to Romance, Cheat on Sonny

“General Hospital” (GH) spoilers tease that no matter how much Carly Corinthos (Laura Wright) tries to reassure herself she can live with the ongoing mob violence, she may soon be tempted away from Sonny Corinthos (Maurice Benard) and towards new doc in town Hamilton Finn (Michael Easton).

It sure seemed generous of Carly to drop by Finn’s room with spare towels and special lettuce for his lizard Roxie – but Carly didn’t just drop these things off and leave. Carly lingered way too long with Finn and seemed genuinely interested in his Roxie story.

But did you also notice how flirty she was? The way Carly lingered at the door all smiley was just a little too interested for someone who claimed she was just there to check in on him and his scaly pal… Admittedly, Finn is hot. Plus, he’s a healer where Sonny is more destructive. 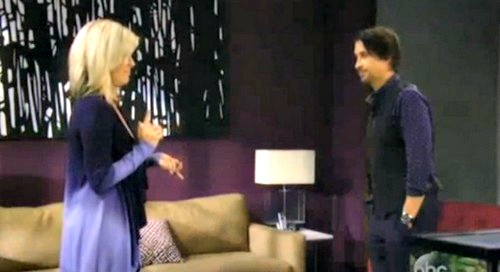 General Hospital spoilers know that Finn came to Port Charles looking for revenge – not romance – and that Jason Morgan (Billy Miller) has a nemesis coming to town soon looking for revenge. It seems like any enemy of Jason’s must also be an enemy of Sonny’s. Is Finn that enemy?

And if Finn is after revenge on Jason and Sonny – heaven knows they’ve killed enough people for that to be true – wouldn’t nabbing Carly away from Sonny be the perfect way to ice the revenge cake? And lest we forget, Carly has a cheating nature – we’ve seen it before.

And if Sonny is not the man she thinks he should be and poses a risk to her family, she might be tempted to get busy with Finn. Sonny and Carly have managed to overcome many obstacles recently, but a Carly attraction to Finn might be one too many hurdles.

And let’s be realistic – does any couple in Port Chuck get a happily ever after with no drama? It seems like Carly and Sonny are way overdue for some serious relationship issues. Since Easton’s return announcement, there have been loads of speculation by GH fans on whom he might romance. 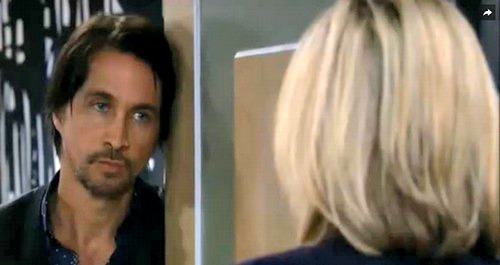 Some think Liz Webber (Rebecca Herbst), some said Nina Clay (Michelle Stafford) based on her history with his doppelganger Silas, while others were hoping it might be Sam Morgan (Kelly Monaco) – but that seems less likely since she’s heavily rekindling with Jason right now.

Sonny doesn’t handle it well when Carly turns to other men – so if Carly does get too cozy with Finn, that would spell trouble. Remember when Jake Doe was first in town? Carly’s growing closeness with Jake was a factor in Sonny taking a hit out on the amnesiac, unaware it was his BFF Jason…

Whatever General Hospital showrunners have planned, it’s evident that Carly and Finn have chemistry. But Easton is smoking hot and could have chemistry with a vacuum cleaner. Even his rapport with his lizard Roxie is downright adorable and he’s already got Epiphany Johnson (Sonya Eddy) wrapped around his finger.

So what do you think GH fans? Do you think Finn and Carly might explore that connection at some point? Will Finn make a move on Carly because he’s out for revenge against Jason and Sonny? Share your comments below and come back to CDL for more “General Hospital” spoilers and news.