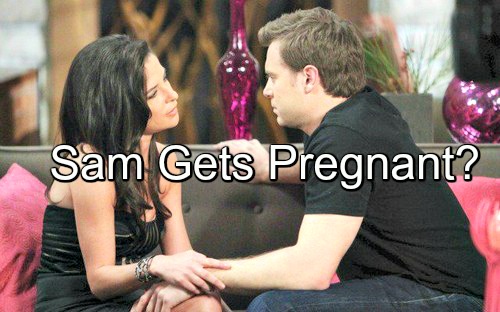 “General Hospital” (GH) spoilers reveal that on episodes next week Jason Morgan (Billy Miller) and Sam Morgan (Kelly Monaco) will finally make love in a moment of spontaneous passion that defies their intention to take things slowly while they get to know each other once again.

But GH spoilers ask if this night of passion will result in a surprise pregnancy? It would be a sweet way to rekindle JaSam since Jason and Sam didn’t really get to bask in her pregnancy with Danny the way they should have. That’s all down to Franco (Roger Howarth) who did them dirty on their honeymoon.

If you recall General Hospital history, he drugged Jason, tied him to a chair and left him watching a video feed of Franco with Sam but then he covered the camera and left Jason with the impression he raped Sam. Because Sam was out of it too, she wasn’t certain whether she had been with Franco or not.

The clouded paternity issues and Franco’s obsession with Jason put a real damper on their prenatal experience with Danny – and you know Jason “died” just as the paternity truth was finally revealed, so it was messed up all around. Franco, though, is no longer an obstacle to their happiness.

And for Jason and Sam to get the chance to experience a loving normal pregnancy together would be amazing – and would absolutely crush any residual hope that Liz Webber (Rebecca Herbst) might have that she and Jason could ever end up together.

GH spoilers tease that fortunately, Liz portrayer Becky Herbst says when she returns from a short hiatus (due to her contract negotiations and lack of filming days while they worked out their issues), Liz will be taken in a whole new exciting direction.

Fingers crossed it’s far away from JaSam – General Hospital showrunners have been riding that triangle for a decade and it’s tired. Jason and Sam deserve some happiness and Liz deserves a man of her own. Of course, GH storylines are nudging her towards Nina Clay’s (Michelle Stafford) man Franco, but we’ll see.

Since Sam and Jason were taking things slowly, though, there’s a chance that Sam is not using birth control and since she was able to get pregnant and carry Danny to full term, it looks like any infertility issues from her shooting are resolved.

What do you think GH fans? Do you hope that Jason and Sam’s night of passion results in them expanding their family? Would you like to see Danny get a little brother or sister? How great would it be to see the new kindler, gentler Jason enjoying a pregnancy with love of his life Sam?