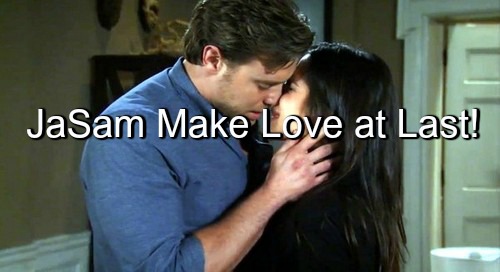 “General Hospital” (GH) spoilers reveal that on next week’s episodes JaSam fans will finally get what they’ve been wanting to see for a year now – Jason Morgan (Billy Miller) and Sam Morgan (Kelly Monaco) will make love next week and it’s a scorcher for sure that’s been slowly building since Jake Doe found out his true identity.

It will all start out innocuously enough – you know Jason and Sam have been putting the brakes on their relationship and getting to know each other again – they even went so far as to have Alexis Davis (Nancy Lee Grahn) consciously uncouple them with divorce docs.

And now they have the whole Rachel Berlin – Hayden Barnes (Rebecca Budig) matter to attend to since Jason wants to help his Quartermaine family get back ELQ. Jason and Sam will be working in close proximity as they look into Hayden’s shooting next week.

GH spoilers say that when the topic of discussion turns to Nikolas Cassadine (Tyler Christopher) it looks like Jason will express some vitriol about Sam’s dark prince cousin. Sam, though, asks Jason to take it easy on Nikolas since he’s going through a really hard time right now.

Jason agrees and then the conversation heats up. Although they were trying to take things slow, General Hospital spoilers promise that the situation turns passionate and they make love. No doubt this will send JaSam fans cheering in excitement and Liason fans crying into their tissues – but it is on next week!

Will Shawn reveal that he was actually aiming for Jake Doe, clueless that he was Jason Morgan? Nothing Shawn says will be good for Jason to hear, so he may stay mum. We’ll see! Will Jason and Sam soon consolidate their lives – will Sam and Danny move into Jason’s new place?

Or will we see them all back at the penthouse together? Plus, we have to wonder how long it will be before Liz Webber (Rebecca Herbst) realizes they’ve consummated their renewed relationship and knows Jason is 100% the property of Sam once again.

Rebecca Herbst has a short hiatus coming from GH since writers had to stop creating scenes for her during the tense renewal talks she had at ABC. But we can expect Liz back on the scene soon and she’ll have to find a way to move on with Jason as her co-parent but not her partner.

What do you think GH fans? Are you excited to finally see Jason and Sam heat up Port Charles? How do you think the bedroom chemistry between Billy Miller and Kelly Monaco will compare to her steamy work with Steve Burton as the old Stone Cold Jason?