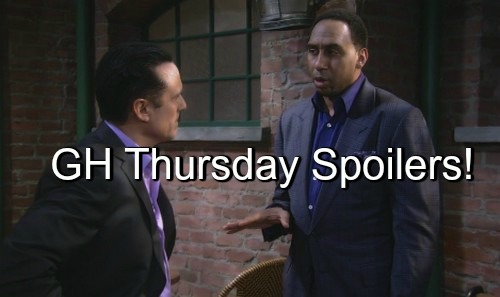 “General Hospital” (GH) spoilers reveal that Sonny and Julian get into a showdown on tomorrow’s episode, Thursday, March 31, plus Emma meets Griffin, Paul is annoyed with Finn, Kiki and Morgan bond, while Carly and Ava don’t see eye to eye. Check out these spoilers for tomorrow’s GH episode.

It didn’t take Julian Jerome (William deVry) long to realize Sonny Corinthos (Maurice Benard) is behind the fake threats to Ava Jerome (Maura West) and why he’s doing it. Julian thinks he’s got the upper hand and tells Sonny to cut it out or else.

Sonny probably won’t come clean, but will he stop what he’s doing since the flimsy plot has been revealed? Sonny taunts Julian about the Carlos Rivera (Jeffrey Vincent Parise) headlines and tells him it’s just a matter of time before Julian goes to jail over Duke’s killing.

GH spoilers ask how Julian will react to Sonny poking his soft spot? Will Julian contact Carlos and make him an offer he can’t refuse? Will Julian use his restored position as the head of the Jerome mob to take care of Carlos and ensure he can’t ever testify against him?

Also discussing Duke will be Emma Drake (Brooklyn Rae Silzer) and Griffin Munro (Matt Cohen). Emma’s hanging with Anna Devane (Finola Hughes) and wants to know if Griffin is a fan of her grandma’s – he is. Does Griffin take this time to slip Anna the DNA results? Those should be in soon!

Over at GH, Paul Hornsby (Richard Burgi) is annoyed that Dillon Quartermaine (Robert P Watkins) told him to steer clear of Tracy Quartermaine (Jane Elliot) and tries to do an end run to get info and goes to Dr Hamilton Finn (Michael Easton).

But no way is Finn going to give Paul the time of day and that frustrates him further. If Paul tries to play the DA card, no doubt Finn will tear that up and throw it back in his face. Maybe Paul needs a service lizard to de-stress him too…

General Hospital spoilers promise that we’ll see ESPN’s Stephen A Smith on new episodes March 31 and April 1 in his two-day cameo as mob surveillance expert “Brick.” Sonny meets up with Brick who tells him he bugged Paul’s office and they plan for Sonny to intercept Paul and distract him while Brick bugs his cell phone.

Out at the Freeman Clinic, Ava Jerome (Maura West) and Carly Corinthos (Laura Wright) chat while their kids visit. Carly wants Ava to leave Avery with them and Ava asks if Carly thinks she’s a monster. But once Julian reveals Sonny is playing Ava for a fool, looks like it’s game over.

Kiki Jerome (Hayley Erin) tells Morgan Corinthos (Bryan Craig) he needs to get his butt in gear. Kiki has gone to extraordinary lengths to help Morgan and isn’t giving up on him now. Looks like Kiki’s visit is exactly what Morgan needed to start pulling himself together.

Share your comments below on all the upcoming action on GH and check back with CDL for daily detailed “General Hospital” spoilers, news and more.