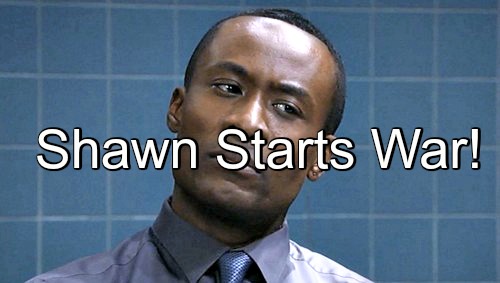 “General Hospital” (GH) spoilers reveal that Shawn Butler (Shawn Blakemore) is back on GH for a new episode next week on Monday April 4, but why and what’s going to happen? For those that are hopeful that Shawn will be exonerated of shooting Hayden Barnes (Rebecca Budig) and set free, that seems like a long shot.

Since GH spoilers indicate that Shawn is back for a single episode or very short arc, what’s far more likely is that he’s part of the investigation into Hayden’s shooting that Jason Morgan (Billy Miller) and Sam Morgan (Kelly Monaco) will soon kick off.

Sam and Jason will have a talk at Kelly’s and Sam shares a theory on the shooting so they decide to investigate. It looks like they will follow in Hayden’s footsteps and first head to Pentonville to speak to Shawn who was accused of her shooting.

Of course, Shawn will be stunned to see Jason’s new face, but has likely heard that he’s back from the dead. Will Shawn want to admit to Jason that he was sent to kill Jake Doe instead of Hayden? It was no biggie to tell Hayden she was not the target.

But will Shawn be willing to rat out Sonny Corinthos (Maurice Benard) to Jason and tell him his BFF put a hit out on him before he realized he was Jason? That’s a major wrinkle in the story. There’s also the fact that Curtis Ashford (Donnell Turner) already went this route.

Curtis took Shawn’s bullet out of the wall at the garage where the shooting happened and matched it to ballistics on Shawn’s gun. That means that Sam and Jason could hit a dead end fast unless Shawn comes clean to them on not only his role in the shooting but also on Curtis’ investigation.

General Hospital spoilers as if  Shawn will point them towards Curtis? Or Hayden? Or will Shawn play dumb so he doesn’t set off a war between Sonny and Jason? Will Shawn warn Sonny that Jason is asking questions about the shooting? The whole reason that Shawn is sitting at Pentonville is to protect Sonny.

So would Shawn put Sonny at risk by telling Jason the truth? Then again, does Shawn want out of jail and knows telling the truth to these two – plus Hayden already knowing – could be the key to him walking out of Pentonville?

It’s a conundrum. The truth is out there… And the truth can set you free… But the truth can also pit Jason against Sonny and rip lives apart. Is Shawn sick of rotting in jail? Would he throw a nugget of truth at Jason to try and secure his release no matter the cost to Sonny?

GH spoilers reveal that Shawn is back for a day may seem like no big deal but, in fact, could be pivotal in terms of storyline because of what it could mean for Jason and Sonny’s tentative friendship and for Nikolas Cassadine (Tyler Christopher) as well.

What will Shawn do? Will he speak the truth or cover for Sonny? It can’t be both. Shawn is at a loyalty crossroads. What do you think Shawn will do GH fans? Share your comments below and come back to CDL often for more “General Hospital” spoilers and news.