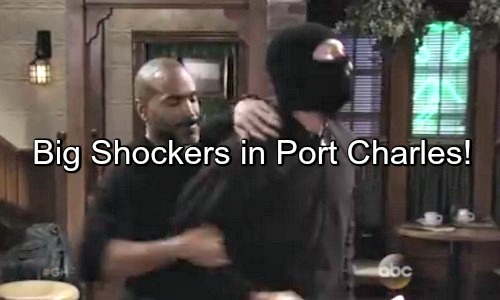 “General Hospital” (GH) spoilers video released today shows lots of actions coming up on this week’s episodes in all the big storylines. The new 15 second trailer promises the reveal of deep dark secrets. Here’s a look at what’s coming this week based on this late-breaking GH spoilers video.

First, Kristina Corinthos (Lexi Ainsworth) seems to be casually coming out to her mom Alexis Davis (Nancy Lee Grahn) asking “would it be so bad if I’m gay?” The video seems to show Alexis looking askance but no way would her mom diss her for being a lesbian.

In fact, General Hospital spoilers reveal that Kristina is surprised by her mom’s reaction. Alexis will be down with Kristina’s “fluid” sexuality but doesn’t like that she lied to her about school. Alexis should reassure Kristina she can come to her about anything no matter what. Aww…

We also see that Nikolas Cassadine (Tyler Christopher) rages at Hayden Barnes (Rebecca Budig) about her Rachel Berlin secret screaming at her “you were lying to me the whole time.” But then watch as Hayden drops the bomb “you tried to have me killed” and then blackmail ensues.

Wyndemere may look like a creepy castle, but it’s really a glass house and many residents there are about to throw stones. Looks like Nikolas’ hands are tied because Hayden has proof of the shooting and will leverage Nikolas to get what she wants. But just what does Hayden-Rachel want?

Also residing in the glass house on Spoon Island is Liz Webber (Rebecca Herbst) who delivers a spectacular bitch slap to Hayden in the midst of a war of words. Liz comes at Hayden for her lies and Hayden responds by rattling the skeletons in Liz’s closet. That’s when the slapfest happens.

Over at Kelly’s diner, it looks like a masked man picked the wrong establishment to rob at gunpoint. Curtis Ashford (Donnell Turner) takes down the bad guy and though it’s not show on the video clip, GH spoilers reveal that Jordan Ashford (Vinessa Antoine) will be there too and they work as a team.

And Sonny is also trying to scare Ava Jerome (Maura West) into giving him full custody of baby Avery. Hmm. Which of these will fail? Sonny’s plans usually fall through when he snaps and can’t control that temper of his. Will he triumph this time?

Over at Crimson, Nina Clay (Michelle Stafford) realizes Julian is the Crimson saboteur – so now what? GH spoilers show that Curtis helps Nina figure this out with his investigation. But what can Nina do about this? It’s Julian’s magazine to do with what he wants, right? How will Nina exact revenge?

Lots happening this week in Port Charles. Check out the GH spoilers video below and come back to CDL every day for detailed “General Hospital” spoilers and news.

All secrets are deep. Some become dark. This week on #GH.