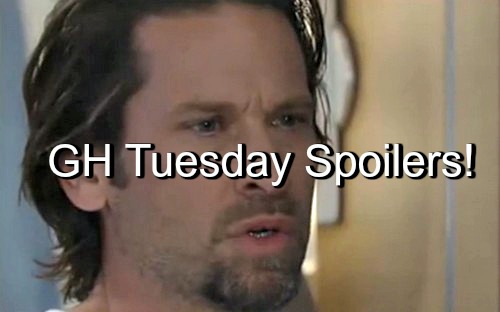 “General Hospital” (GH) spoilers reveal on tomorrow’s episode that Jason suspects Franco of potential violence on Tuesday April 26 after a fight between the two – plus new guy Aaron hits town and has his eye on Kristina, and a witness to Carlos’ crime emerges. Here’s what we’ll see on Tuesday’s episode of GH.

Was it the stress of Franco (Roger Howarth) reminding Jason Morgan (Billy Miller) that he’s a killer that sparked some memories for the former hit man? Jason now recalls that he and Franco have a bloody past but can’t quite recall of it.

As their confrontation escalates, Sam Morgan (Kelly Monaco) and Liesl Obrecht (Kathleen Gati) will pull the two men off each other before things get worse. After Jason leaves with Sam, Franco admits he’s considering indulging his darker nature once again.

Since Liesl admired that part of him, she may encourage him to go for it. Meanwhile, Jason shares his recovered memories with Sam over at the Floating Rib and she fills in the gaps. There’s a lot of ugliness in the past between Jason and Franco.

Jason tells Sam he thinks that Franco still has a propensity for violence – but General Hospital spoilers know it’s Jason who is far more likely to hurt someone these days than Franco. Also at The Rib, Nina Clay (Michelle Stafford) runs into Dillon Quartermaine (Robert P Watkins) quite literally.

They tumble into each other and her bags go flying. GH spoilers ask if Nina will apologize for near-molesting Dillon? It could make things awkward at work if she doesn’t. Dillon may ask about Kiki Jerome (Hayley Erin) because he’s still interested in being her friend and perhaps more.

Over at Nina’s place, Kiki gets a visit from her mom Ava Jerome (Maura West) who thinks Kiki can move back in with her soon and tells Kiki that they’re safe and baby Avery can come home. That’s one good thing about Julian Jerome (William deVry) getting mobbed up again.

At the PCPD, a guy named Hale wanders into the police station with an eyewitness statement against Carlos Rivera (Jeffrey V Parise). Where has this guy been? Duke Lavery (Ian Buchanan) was shot almost a year ago. Is this a Sonny Corinthos (Maurice Benard) scam?

We saw that Sonny talked to Max Giambetti (Derk Cheetwood) about him taking care of something. Did Sonny pay off someone to say they witnessed the shooting to make sure that Carlos doesn’t walk out of jail free and clear?

John DeLuca debuts as new guy Aaron and he may work at Sonny’s coffee establishment since he has scenes with Sonny and will develop an instant liking of Kristina Corinthos (Lexi Ainsworth) who may use him to try and get over Parker (Ashley Jones).

Alexis Davis (Nancy Lee Grahn) is upset about Molly Lansing (Haley Pullos) going off on her about defending Carlos and Julian finds Alexis at home distraught. She tells him they’re going to lose everything and the witness is definitely unwelcome news.

Over at Sonny’s office, Ric Lansing (Rick Hearst) barges in and tells Sonny about the witness. Carly Corinthos (Laura Wright) is there and she and Ric can’t be too happy to see each other. If Sonny does NOT seem surprised by the witness news whether he had a hand in this.

Jordan Ashford (Vinessa Antoine) talks to Hale – the guy who says he saw the shooting. Does he work at the MetroCourt or was he a random bystander who happened to be down in the garage since that’s where the shooting took place?

Carlos will be stunned to learn about the witness and Julian reacts badly to his news and is desperate for things to work out in his favor. Ric offers some advice to his brother who likely won’t listen – Sonny thinks he has everything under control.

All this and more on the Tuesday April 26 episode of GH. Watch and then come back to CDL for detailed daily “General Hospital” spoilers, news and more.