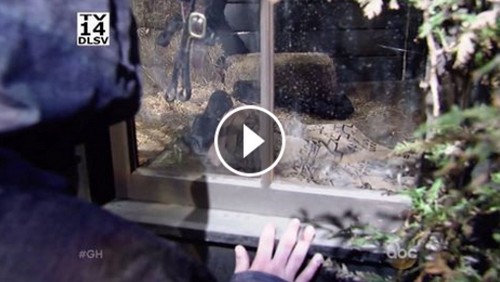 “General Hospital” (GH) spoilers from a new ABC promo video show us that Carlos Rivera (Jeffrey V Parise) gets a shocker when he finds out about a witness to Duke Lavery’s (Ian Buchanan) murder, Julian Jerome (William deVry) takes drastic action, and a hot new couple get even hotter.

First, it looks like someone saw Carlos shoot Duke but they never came forward – likely because Carlos was presumed dead so what they saw didn’t really matter. But with Carlos alive, the witness reveals himself to the PCPD and Julian is forced to take action.

Julian isn’t one to get his hands dirty so it would be a real stunner if he took out the guy personally – plus now that he’s back running the Jerome organization, Julian can just order a kill. The guy who is whacked looks young – perhaps someone who worked at the MetroCourt…

Also, if you notice in the video, when Alexis Davis (Nancy Lee Grahn) breaks the news to Carlos that a witness ID’d him, the flashback Carlos has looks like another killing. Carlos shot Duke in the MetroCourt garage – the flashback is to Carlos in an apartment or hotel room.

When Julian says “it’s done” that should mean disposing of the witness. Julian has to keep Carlos out of prison so Carlos doesn’t roll over on him but this witness killing will cause big problems with Alexis Davis (Nancy Lee Grahn) who soon realizes her hubby is mobbed up once again.

Also on the General Hospital video promo, we see Jason Morgan (Billy Miller) and Sam Morgan (Kelly Monaco) getting busy in a stable and someone is peering in the window at them. The stalker appears to be someone young and/or female based on the size of the hands and the height of the person.

We know Sam and Jason will figure out they’re being watched but will think it’s someone they know already – Franco (Roger Howarth). Also what’s odd is that the person checking them out looks to be in strange clothing. What is that about?

Finally, the GH video promo also shows us that Andre Maddox (Anthony Montgomery) puts big moves on Jordan Ashford (Vinessa Antoine) and finally takes her to bed. That should be steamy – but don’t count Andre out of Anna Devane’s (Finola Hughes) life even though Jordan is jealous.

Andre and Anna have a bond that a roll in the sheets with Jordan will not quell. We’re wondering if Andre and Jordan finally making love will make Jordan less anxious about Anna being in Andre’s life – or make her much, much worse…

What do you think GH fans? Are you excited to see all the action this week in Port Charles? Share your comments below and come back to CDL often for more “General Hospital” spoilers and news.