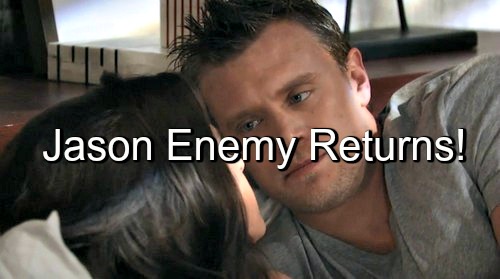 “General Hospital” (GH) spoilers reveal that Jason Morgan (Billy Miller) will soon face an enemy from his past while upcoming confrontations with Franco (Roger Howarth) are a red herring that throw off Sam Morgan (Kelly Monaco) and Jason from figuring out who’s after them until it’s too late.

On this week’s episodes, Jason will be upset when Franco gifts Jake Spencer (Hudson West) a puppy and that sets off an in-your-face confrontation. Franco isn’t usually scared of anything so he won’t back down like most people do when Jason tries to intimidate them.

General Hospital spoilers say that as the confrontation gets physical, Sam and Liesl Obrecht (Kathleen Gati) intervene. What makes all this more tense is memory flashes that Jason gets of past interactions with Franco. To be sure, the history between Franco and Jason is messy, complicated, and fraught with violence.

But post-tumor Franco and post-microchip Jason are not the same men they once were. The problem is, Jason is not a deep thinker and often doesn’t look beyond what’s right in front of him. When Sam fills in the gaps in his memories about his terrible history with Franco, Jason gets obsessive.

What aggravates this is Liz Webber’s (Rebecca Herbst) growing closeness to Franco and ignoring Jason’s request to cut Franco out of her life and Jake’s. But Liz sees that Franco is helping Jake – plus annoying her ex is a bonus since he chose Sam over her, so Franco will stay in their lives.

Franco will make a conciliatory gesture towards Jason and tells his former adversary that they are both new men – he’s no longer a serial killer and Jason is no longer Stone Cold. But that won’t convince Jason who is also struggling with ongoing violent tendencies.

Later this week, GH spoilers say that Sam and Jason get the strange feeling that they’re being watched – and they are. But with the info Sam just gave Jason on Franco being obsessed with Stone Cold, Jason will assume Franco is the stalker – but he’s not.

Jason will fail to figure things out because he’s so willing to blame Franco for what happens. Sam is also very anti-Franco and may indulge that theory for too long. This will all build up until the night of the Nurse’s Ball.

Something happens that makes it clear to both Jason and Sam that they are in danger – and Franco is NOT the problem. Then Sam and Jason have to dig into why someone is after Jason, and how they can shut this unknown enemy down before he (or she) harms their reunited family.

GH spoilers tease that these events tie back to the curse from Helena Cassadine (Constance Towers). But the enemy may have nothing to do with the dead dowager – but Sam can’t get the curse out of her mind when things go awry.

On the night of the Nurse’s Ball, Sam and Jason will set off an adventure to confront this unknown enemy and this will put them both in danger. But is this a mob enemy of Stone Cold or a newer foe that resulted from Jason’s actions when he was operating as Helena’s pet assassin?

What do you think GH fans? Did Helena know about Jason’s lurking enemy when she cursed Sam? Share your comments below and come back to CDL often for detailed daily “General Hospital” spoilers, news and more.