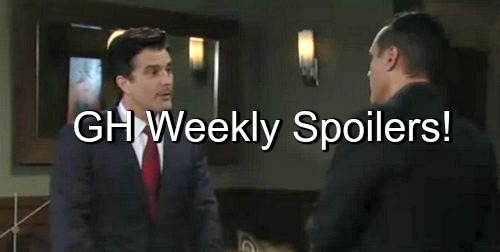 Here’s what to expect for the week on GH.

Early in the week, we get our first look at the Jake Spencer (Hudson West) recast while Franco (Roger Howarth) and Jason Morgan (Billy Miller) bicker over the boy. This brings up memory flashes of things Franco did to Jason in the past and Jason lashes out physically.

Dr Obrecht (Kathleen Gati) and Sam Morgan (Kelly Monaco) have to shut that down and when Jason shares the memory, Sam fills the gaps in for him which leaves Jason seething. Franco doesn’t want this to play out badly and tries to reassure Jason that they have both changed.

General Hospital spoilers say Sam and Jason get the creepy feeling they’re being watched then discover they’re correct, but who is it? Jason worries more about his violent urges and has to straighten out Sonny Corinthos (Maurice Benard) when he doubts Sonny’s motivations in a matter.

Obrecht later encourages Franco to dig into his dark side to deal with Jason but Franco doesn’t want to be that guy again. Maxie Jones (Kirsten Storms) seeks Sam out later in the week to investigate Nathan West (Ryan Paevey) and his past with Claudette.

Alexis Davis (Nancy lee Grahn) is hopeful she can get the Carlos case dismissed and Julian Jerome (William deVry) begins to relax but then they’re floored when a witness to Duke Lavery’s (Ian Buchanan) shooting comes forward.

This occurs simultaneously to Ric Lansing (Rick Hearst) coming back to town to stir trouble – and he hates both Julian and Carlos. Alexis shakes things up in court and Sonny is outraged at the lengths she goes to – even though she’s done the same for him in the past.

GH spoilers warn that Julian takes action that he may regret later and betrays the promises he’s made to his wife. Alexis has to give Carlos some bad news – he demands cash for his silence and Julian reveals something shocking to Ava Jerome (Maura West) about his mob connections.

Nina Clay (Michelle Stafford) isn’t happy when she finds Julian in her office at Crimson but they’ll reach a new understanding. Later in the week, Nina has a message for Franco that has him worried that she’s done with him.

While Scotty Baldwin (Kin Shriner) and Andre Maddox (Anthony Montgomery) work to keep Anna Devane (Finola Hughes) out of Pentonville, Paul Hornsby (Richard Burgi) follows through with a threat he’s made. But is it Carlos or Anna he’s after?

Michael Quartermaine (Chad Duell) and Felix DuBois (Marc Samuel) get closer to finding Sabrina Santiago (Teresa Castillo) but Sonny doesn’t like the lengths Michael is going to. Father and son will argue over Sabrina but Michael will persist.

Carly Corinthos (Laura Wright) continues to be concerned about Dr Hamilton Finn (Michael Easton) and gets some advice she’s not sure she should take. Carly still isn’t sure about Finn’s diabetes cover story. Looks like Monica Quartermaine (Leslie Charleson) could make a move to oust Obrecht.

Romance is in the air as Lucas Jones (Ryan Carnes) and Brad Cooper (Parry Shen) make wedding plans to get hitched a year from their engagement right around the time of the Nurse’s Ball. Kristina Corinthos (Lexi Ainsworth) decides to see where it goes when a cute guy flirts with her.

Aaron (John DeLuca) is new in town and talks to both Sonny and Kristina and she decides to take Sam’s advice and explore as she questions her sexuality. Tracy Quartermaine (Jane Elliot) celebrates her recovery by firing Hayden Barnes (Rebecca Budig) who also has trouble on the home front.

Dillon Quartermaine (Robert P Watkins) reaches out to Kiki Jerome (Hayley Erin) as a friend while she continues to recover. He’s clearly interested but she’s focused on Morgan Corinthos (Bryan Craig) much to Dillon’s dismay. He’s had no luck with love since he came back to town.

Don’t miss a moment of next week’s GH episodes – lots to see on this week’s episodes from Monday, April 25, through Friday, April 29 – and be sure to check back with CDL every day for detailed daily “General Hospital” spoilers and news.