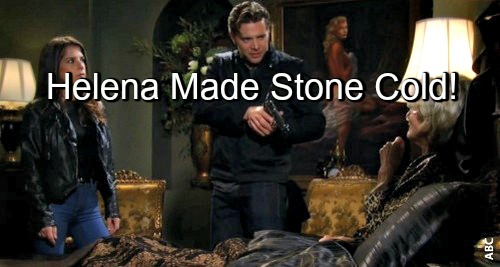 “General Hospital” (GH) spoilers reveal that on next week’s episodes and during May sweeps Jason Morgan (Billy Miller) will continued to be plagued by fits of violence that have him worried about whether he can ever be normal. Perhaps he can’t – but the reason behind his uncontrollable rage may be Helena Cassadine (Constance Towers).

While it’s true that the old Stone Cold Jason had a great capacity for violence, he was usually very methodical about how he dispensed it. That’s what made Jason such an effective mob enforcer. Violence was a tool Jason used when he had to and that he didn’t mind using.

New Jason, though, doesn’t have control over the violence like old Jason did. Now, Jason’s rage bursts out like a volcanic flow of danger. Twice now he’s almost killed Nikolas Cassadine (Tyler Christopher) when provoked – even though Nikolas clearly was owed a beating…

And in coming days, General Hospital spoilers warn that Jason will have an encounter with Franco (Roger Howarth) that once again sends him over the edge. Sam Morgan (Kelly Monaco) and Dr Liesl Obrecht (Kathleen Gati) will have to pull Jason off of Franco who isn’t expecting the vitriol.

What’s worse is that Jason might do this in front of Jake Spencer (Hudson West) which would terrify the kid who really likes Franco. That’s not anything that either of Jason’s sons needs to see him doing but he just can’t seem to control it.

Remember that Helena had Jason under her “care” for a long time before Jake Doe made his way back to Port Charles only to be run over by Ava Jerome (Maura West). You may recall there was a microchip in Jason’s brain that Helena had installed to help control him.

Patrick Drake (Jason Thompson) dug it out during surgery but was the microchip just part of what Helena did to him? Did Helena also condition Jason through behavioral modification to make him her pet assassin? Helena’s control over Jake Doe wasn’t perfect since he failed to kill Sam on her orders.

But that doesn’t mean that the programming hasn’t deeply affected him. So far, Jason does NOT seem to be a danger to anyone he loves, but if you’re on his bad side, you could be dead in short order. Jason has amassed quite a body count since he was “cured” of the microchip.

Jason might think that his issues are something that could be addressed by anger management counseling or sessions with Dr Kevin Collins (Jon Lindström) but honestly, if anyone has a chance to straighten out Jason, it might be Franco’s art therapy.

Franco understands Jason and violence. However, there is no way Jason would work with Franco – at least not at this point – and if the reformed serial killer suggested it, Jason would probably shove Franco’s colored pencils where they would be most painful…

GH spoilers predict that Jason faces some tough times in coming months. He wants to be a civilized Quartermaine but instead, it seems like he’s fulfilling Helena’s curse on Sam. Helena cursed Sam “and all those who touch you” and said “you and yours will never know happiness in this life, nor any other.”

Jason definitely qualifies as someone who touches Sam and if he can’t get control of his violent nature, they likely will not know true happiness. What do you think? Can Jason be cured? Was the microchip just part of what Helena did to him?

If so, is what Helena did to Jason’s brain fixable or is he destined to be a rage monster who can’t control the beast within? Did Sam get Jason back only to lose him to an internal struggle? GH spoilers reveal May sweeps will send Sam and Jason off on an adventure.

Perhaps that’s how they will find the answers they need… What do you think GH fans? Do you blame Helena for Jason’s fits of rage? Or are they simply a by-product of the repeated brain injuries from car wrecks and other misadventure that has befallen him over the years?