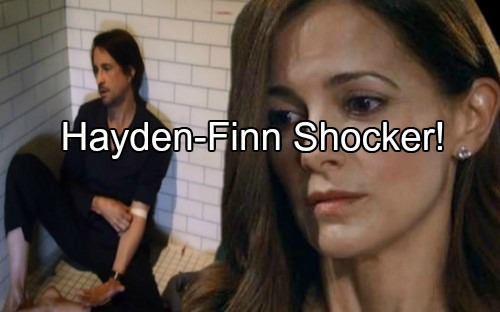 “General Hospital” (GH) spoilers reveal that on this week’s episodes, Hayden Barnes (Rebecca Budig) will find Hamilton Finn (Michael Easton) in the midst of one of his really bad fits and she’ll help him, despite his protests that he doesn’t want her around.

Hayden won’t turn her back on him, though, even though she knows Finn hates her. Instead, she’ll help him get what he needs to get back to “normal” and General Hospital spoilers tell us that this will be the start of an unlikely friendship that will turn to romance and surprise them both.

In fact, it may be Hayden that’s the first to unravel the secrets that Finn is keeping. Finn is typically weird and off-putting when he meets new people, but when he heard Hayden’s real name, Rachel Berlin, he was downright hostile and critical.

That’s understandable since her dad’s Ponzi schemes messed up Finn’s critical research and cost the life of someone he cared about. Also, did the research that Raymond Berlin’s thieving ruined have anything to do with what’s ailing Finn now?

Of all the women in Port Charles, Hayden is the last one that Finn would willingly pursue, but GH spoilers tease that he can’t fight the attraction. This romance is also odd since both are potential suspects in two different murder mysteries unfolding in Port Chuck.

Liz Webber (Rebecca Herbst) will insist to Jordan Ashford (Vinessa Antoine) that Hayden had motive to kill Nikolas Cassadine (Tyler Christopher) because of the diamonds he stole from her. And Finn will be the prime suspect in an upcoming GH serial killer investigation.

Perhaps them both being suspected of crimes they didn’t commit will forge a bond between them. Plus, both seem to hate her father. When Hayden saves Finn this week, we’ll see the beginning sparks of what should be white-hot chemistry between these two.

And since Nikolas is presumed dead, although he’s not, and made it clear to Hayden before he went missing that he’s done with her, there’s no obstacle to romance with Finn. However, them getting involved could make them both look sketchier to the cops.

In fact, these two hooking up is a bad idea in a lot of ways. Carly Corinthos (Laura Wright) is close to Finn and she hates Hayden for lying to Jason Morgan (Billy Miller) and Tracy Quartermaine (Jane Elliot), another Finn fan, also despises Hayden.

But chemistry is chemistry. Although both Hayden and Finn will resist temptation since a relationship will not cast either in a favorable light, it may be too much to fight. Could Hayden win the heart of lizard man? She’ll have to get Roxie’s approval first…

What do you think GH fans? What do you think of a possible pairing of Hayden and Finn? Will his hatred for her family provoke passion? Can Hayden learn to love his lizard? Share your comments and check back with CDL often for more “General Hospital” spoilers and news.