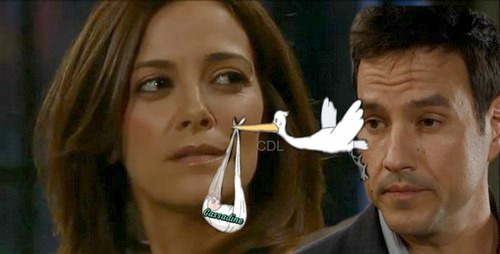 “General Hospital” (GH) spoilers reveals that Hayden Barnes (Rebecca Budig) will not leave Port Charles empty handed even though Nikolas Cassadine (Tyler Christopher) is trying to get her to leave with nothing. But will Hayden turn the tables on Nikolas by getting pregnant?

Since Nikolas and Hayden decided to call a stalemate on their marriage and table the divorce for now, that buys Hayden time to change things. General Hospital spoilers say this is an opportunity on tomorrow’s episode, Wednesday, May 4, for Hayden to create a situation where Nikolas wants to keep her and will not turn her out penniless.

If Hayden can produce a Cassadine heir, no way can Nikolas make her go away – and he certainly can’t make her go away without money. Plus, if Hayden did turn up pregnant, that might soften Nikolas’ anger to some extent and get their marriage back on track.

The Cassadines love their heirs and family is important above all – so no matter what Hayden has done or how Nikolas feels about her now, his Cassadine protective instincts would kick in with regard to a baby and that would extend to Hayden as well.

Liz Webber (Rebecca Herbst) is back in Port Charles this week and GH spoilers indicate that Liz will be whispering in Nikolas’ ear trash talking Hayden-Rachel while Curtis Ashford (Donnell Turner) is whispering in Hayden’s ear telling her to run far away from Nikolas.

After the two argued recently, Hayden asked about wifely privilege – she meant money – but Nikolas started stripping off his clothes thinking she meant sex. Clearly Nikolas has no problem continuing to bed Hayden and that will be a major mistake for the prince.

The fact is, Nikolas doesn’t hate Hayden like he says. He still loves her and he still wants her – or else he wouldn’t have been pulling off his clothes to do his “husbandly duty.” Hayden will leverage Nikolas’ residual affection and desire for her to make sure he can never get rid of her again.

That means a baby! Spencer Cassadine (Nicolas Bechtel) is back soon for an episode or two and we know that Spencer adores Hayden and would be thrilled if Hayden was gestating a baby sibling for him to play with. No way could Nik get rid of Hayden after that…

What do you think GH fans? Would you be a fan of a Hayden-Nikolas baby? Spencer would be thrilled for sure but can anything mend the rift between Nikolas and Hayden – even a baby – or are they too broken to ever be put back together again?

Share your comments below and check back with CDL for more “General Hospital” spoilers and news.