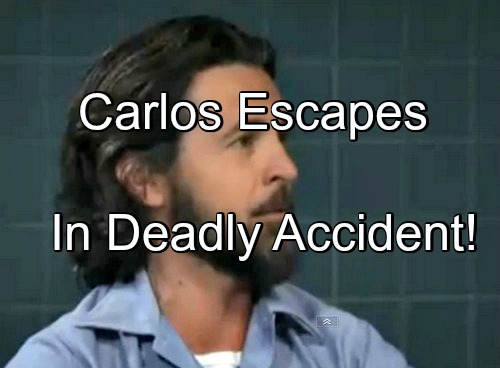 “General Hospital” (GH) spoilers reveal that there will be life or death action on next week’s episodes in Port Charles and it centers on a Carlos Rivera (Jeffrey V Parise) jailbreak. Spoilers have leaked that there will be an accident involving a PCPD van that’s transporting Carlos – likely to court.

There’s a question of whether it’s an unhappy accident that the PCPD van gets into a crash – or if this is the work of Julian Jerome (William deVry) and his henchman Hammer in a bold attempt to break Carlos out and get him out of Port Charles once and for all so he can’t testify.

When the horrific accident goes down, Carlos breaks out of his bonds and runs away from his police escort and heads off a free man, but on the lam. Meanwhile, someone in the accident is in a life or death situation and is taken to GH for urgent medical attention.

General Hospital spoilers ask if it one of the cops escorting Carlos? Or perhaps collateral damage from another car in the accident? That remains to be seen, but Carlos will get away from the Port Charles cops and takes off, but where will he go and what will he do?

What happens next depends on whether Carlos was broken out by the Jerome cartel or if he took advantage of a bad situation and broke himself out. Clearly, Carlos has to hide out and he might also be injured as a result of the accident.

GH spoilers warn that once word spreads of the accident, accusations will abound. Sam Morgan (Kelly Monaco) will confront her mother Alexis Davis (Nancy L Grahn) about all the shady action surrounding Julian. First Hale the witness is whacked and then Carlos escapes.

Sonny Corinthos (Maurice Benard) threatened Julian’s life if he harmed Carlos so he couldn’t testify – but this is an escape, so technically Julian is still within the bounds of Sonny’s parameters. Sonny won’t mince words and will likely go after Julian anyway.

How long can Carlos evade capture? We’ll see. And in the midst of all of this, GH May sweeps spoilers reveal that Sabrina Santiago (Teresa Castillo) will be found but if Carlos spoke the truth when he said they were married, the statements Sabrina gave the cops about Carlos are now inadmissible.

The case against Carlos for shooting Duke Lavery (Ian Buchanan) was more about nailing Julian than Carlos, and after this escape, it all falls apart. Alexis must acknowledge that her husband is back in the mob game and she’s got to accept it or break off their new marriage.

There’s lots of drama to come out of this car accident – and it may not be an accident at all. Carlos will be on the run – someone will be fighting for their life – Anna Devane (Finola Hughes) will lose her grip – and Julian may finally have to come clean to Alexis.

Don’t miss a moment of the GH action coming soon with the big Carlos escape. And be sure to check back with CDL every day for detailed “General Hospital” spoilers and news.