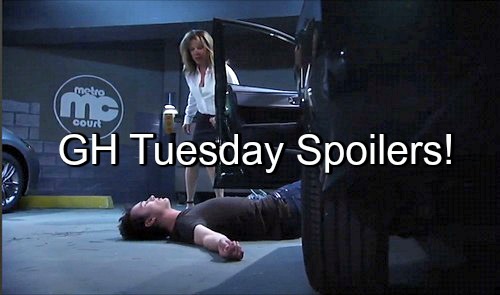 “General Hospital” (GH) spoilers tease that Nikolas turns the tables on Hayden on tomorrow’s episode, Tuesday May 3 while Franco is wrongly accused of stalking. Robin Mattson will be featured on General Hospital starting on May 11 and we know Franco’s mother, Heather, will answer some questions and bring some surprises.

Alexis Davis (Nancy L Grahn) is stunned to find the witness she just talked to collapsed in his car in the parking deck. Alexis calls for help and we’ll see Nathan West (Ryan Paevey) come running but it’s far too late for Hale, the witness. He’s dead of a staged OD.

We know that Hammer is responsible and took the guy out at Julian Jerome’s (William deVry) request. General Hospital spoilers say that just as Julian hangs up the phone with Hammer, Nina Clay (Michelle Stafford) walks in and asks who he’s talking to. Julian will lie – as usual.

After they get that out of the way, Nina confides to Julian that she and Franco (Roger Howarth) have called it quits. She tells him the baby drama wrecked them and she’s got to find a way to move on. Does Julian have any good advice to offer to Nina?

Anna Devane (Finola Hughes) finds out that there’s an eye witness to Duke Lavery’s (Ian Buchanan) shooting and she shares the news with Griffin Munro (Matt Cohen). But their excitement won’t last long because Anna finds out that Hale is dead and she goes ballistic.

Anna goes to find Alexis and confronts her about the dead witness. Anna will have to defend her choices to be with Julian, to represent Carlos Rivera (Jeffrey V Parise), and to help them get away with murdering the love of Anna’s life.

Over at the park, GH spoilers warn that Jason Morgan (Billy Miller) and Sam Morgan (Kelly Monaco) are stunned to find Franco lurking nearby. What was he doing in the trees? Surely there’s an innocent explanation for Franco being that close to them.

Sam and Jason tell Franco they know he was stalking them at the barn but that wasn’t him, right? Can Franco explain himself to their satisfaction? Jason and Sam are stuck on Franco’s past but he’ll say he’s changed and so has Jason. How will this go?

Sam and Jason also see Franco’s bizarre drawing of Nina and that helps convince them that Franco has lost his marbles again. Since Jason and Sam saw it, Franco decides to gift it to Nina and heads to see her at her office. But the drawing is odd, even for Nina.

Hayden Barnes (Rebecca Budig) is ready to take her $5 million and run, but Nikolas Cassadine (Tyler Christopher) isn’t going to give her a nickel. Nikolas will try to use the diamonds he showed her to leverage Hayden to go away quietly and with no money.

Will she go? Hayden has an agenda involving Nikolas that’s still playing out. What is it and can Nikolas beat her at her game? Share your comments below and check back with CDL every day for more “General Hospital” spoilers and news.