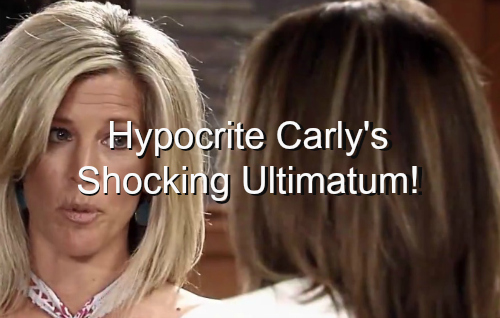 “General Hospital” (GH) spoilers from a new video show a shocking confrontation between mob wives Carly Corinthos (Laura Wright) and Alexis Davis (Nancy Grahn). The voice over says “When you marry the mob, loyalty is everything.”

But let’s be clear, Alexis didn’t marry the mob. The only reason Alexis said yes when Julian Jerome (William deVry) proposed was because she thought he was out of the cartel for good – the mob was a deal breaker for her.

On today’s show, Tuesday, June 7, Julian will discover that Alexis didn’t destroy the bloody shirt and they’ll have a major blow up. Alexis tells Julian that he can have her or “he can get away with murder.” Hmm. Come on Alexis, really?

If Julian can’t get away with murder, then he can’t have her anyway because he’ll be in Pentonville for life! But what’s truly stunning about the promo trailer is how Carly comes at Alexis.

Just as Carly handled Ava Jerome (Maura West), she’s trying to do more of her husband’s dirty work. Carly seems to be trying to solve all of Sonny Corinthos’ (Maurice Benard) problems for him these days.

Carly shows up to Alexis’ house and tells her flat out she can’t shield Julian anymore. Carly says, “The more you protect him, the worse it’s going to be.” But really, Carly? Doesn’t Carly shield Sonny constantly?

Carly’s married to a mob boss and killer the same as Alexis is. There’s a skewed perception that Sonny is the “good” mob boss while Julian is the “bad” mob boss and it’s never more clear than in this video.

Yes, Julian had Duke Lavery (Ian Buchanan) shot but Sonny shot AJ, the biological father of his adopted son and is lucky not to be in Pentonville himself. We’ve seen both Julian and Sonny shoot down men who were probably fathers and husbands.

Killing is killing, right? So when Carly comes at Alexis this way, it’s the ultimate hypocrisy. But will Alexis take Carly’s words to heart or will she put on her logical thinking cap and point out to Carly that they are in the same boat? 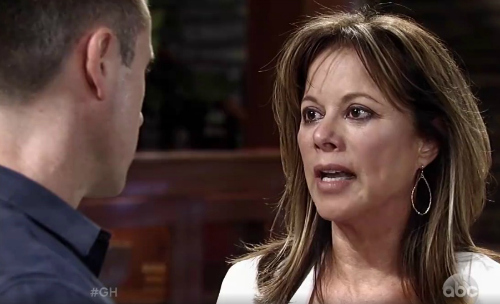 Do Carly and Sonny really have a moral leg to stand on here? Of course, CarSon is a fan favorite couple, that’s true. But they are much the same as Julexis. The only difference – and this is a big one – is that Alexis didn’t sign on to be a mob wife.

But Carly did marry the mob – and did so with enthusiasm. Later in the episode, Julian will stun Alexis when she gives him an ultimatum and he responds by saying, “til death do us part – I meant every word.”

Alexis looks scared when he says that. Does she think he might hurt her to protect his secret? Or that he’d rather take them both out in a blaze of glory rather than go to jail? Today’s showdown between Alexis and Julian will be bad.

It looks like the end of Julexis. Alexis will start to crumble under the weight of the terrible secret she’s keeping for Julian and the hidden evidence, but also because Sonny, Carly and Diane Miller (Carolyn Hennesy) will all confront her.

Alexis is at the breaking point already when Julian delivers his “til death do us part” shocker and she may not be able to handle it. Fortunately, Julian will soon realize he went too far in speaking to Alexis that way and will try to repair things.

But is it too late? GH spoilers reveal that Alexis doesn’t want things to be over with Julian, but she wants him to be held accountable for his crimes. That won’t happen. If Alexis sends Julian to jail, there’s no way he’ll accept that betrayal.

Ava has killed to protect Julian – so destroying a bit of bloody evidence seems like the least he can expect from his wife, right? Also of interest is a GH spoiler that Julian and Nina Clay (Michelle Stafford) will get closer soon.

Nina is more of ride-or-die gal than Alexis, so this could be big. Also important is that by next week, the PCPD will have the Cassadine dagger used to kill Carlos in their possession.

If Julian destroys the shirt he found, will Alexis give them the dagger instead? What do you think GH fans? Is Carly a hypocrite to criticize Alexis for covering for Julian? Is Julian wrong to expect loyalty from his wife?

Share your comments below on this GH controversy and check back with CDL often for more “General Hospital” spoilers and news.