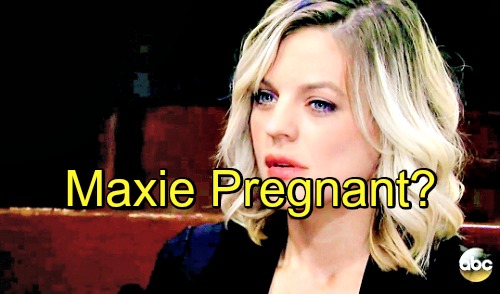 General Hospital (GH) spoilers discuss the possibility that Maxie is pregnant and what affect this could have on her relationship with Nathan and perhaps Claudette. The ‘General Hospital” episode on August 30 showed Maxie (Kirsten Storms) at the Floating Rib with her mother, Felicia Scorpio (Kristina Wagner) talking about her troubles in regards to Nathan and her fears that her fiancé is possibly still in love with his ex-wife, Claudette (Bree Williamson).

General Hospital spoilers readers know that Maxie is now convinced of this ever since Nathan physically attacked the ex-priest, Griffin (Matt Cohen), just a few days ago. We know that Nathan loves Maxie but could Maxie be right, perhaps he is actually in love with two women – and where does Griffin fit into this awkward love triangle?

Will Nathan decide he loves Claudette after-all and leave Maxie at the alter or will something big like a pregnancy suddenly change his position? That is entirely possible.

As GH viewers saw, Maxie spoke with her fiancée about Claudette and how he really feels about her and of course, he convinced Maxie of his devotion to “only” her, but not before Maxie began feeling dizzy and light-headed for no apparent reason. Could this be morning sickness? Of course, we need to keep in mind that Maxie has cousin BJ’s heart which could account for dizziness as well.

General Hospital spoilers as could Maxie be pregnant or is the stress starting to get to her physically? Nathan and Maxie certainly have been intimate quite a lot lately so it is entirely possible that a pregnancy could occur. Would a pregnancy be enough to save her relationship with Nathan? Will this be the final push that Claudette needs to back away and also for Nathan so as he quits obsessing on Claudette and focus on Maxie and their baby?

We do know that a GH pregnancy would be unexpected at this point but might be the one thing that would save their relationship if Nathan is having any doubts about his love for the woman he is supposed to soon marry.

Of course, if Nathan does decide to explore his feelings for his ex-wife that would cause resentment in Maxie? Could the stress of Nathan and Claudette’s relationship endanger her baby and what about Claudette? Only time will tell what Nathan will decide or which woman he truly loves and if an unexpected pregnancy would be what is needed to save the relationship and maybe it wouldn’t matter.

Perhaps, Nathan truly loves Maxie and is just conflicted – after all Claudette seems to be very good at manipulating those around her. Stay tuned into ABC’s General Hospital for more on what’s to come for this exciting couple and come back to CDL for all your General Hospital spoilers, news and updates.