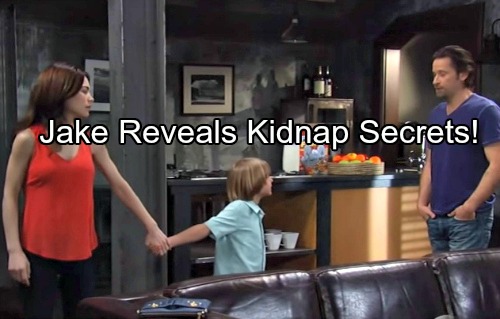 “General Hospital” (GH) spoilers reveal that on next week’s episodes Jake Webber (Hudson West) will spill some big secrets to Franco (Roger Howarth) about his kidnapping and time on Cassadine Island that will set off a major story arc.

They leave to chase down leads regarding Nikolas Cassadine’s (Tyler Christopher) disappearance but their absence gives Jake more quality time with Franco – and this sparks something major! Jake opens up to Franco.

Franco has seen the weird little book that Helena Cassadine (Constance Towers) left Liz and this may be a talking point for Jake and Franco. No matter what starts the conversation, Jake opens up to Franco about his captivity.

Of course, it’s doubtful that Jake knew he had been kidnapped, since he was so young when he was taken. He may have thought he was on vacation and that Helena was his granny. But what Jake tells Franco is of interest.

GH spoilers warn that Jake tells Franco that he spent time on Cassadine Island with a woman and her daughter when Helena was away. But who is this mystery woman? And who is the child that Franco spent time with? We’ll find out in coming weeks.

Jake’s conversation with Franco is revealing and Franco will share the details with Liz. Then Liz and Franco will decide to go to Cassadine Island looking for answers. They likely will NOT know that Jason and Sam are already there.

Franco and Liz will be captured by some henchmen on the island, according to GH spoilers, but will be helped out by a stranger. Franco, Liz, Jason, Sam and Hayden Barnes (Rebecca Budig) will end up on the same part of the island.

Others from Port Charles will be on the other side of the island also looking into other Helena mysteries. Spoilers tease that Franco and Liz will unearth some shocking revelations about Jake’s captivity that explain a lot.

Jason will not be happy to see Franco and Liz together but will Stone Cold soften when he realizes that Franco may be the key to finding out more about Jake’s secret past on Cassadine Island? We also have to wonder how much Nik knew.

This adventure should advance Liz and Franco’s new romance to greater heights and they may come back to Port Charles as a confirmed couple. What do you think GH fans? Are you excited about the upcoming Cassadine Island adventure?