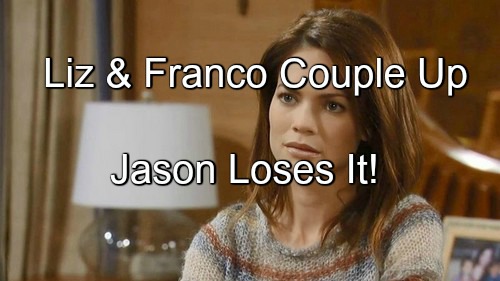 “General Hospital” (GH) spoilers tease that no matter how much Jason Morgan (Billy Miller) wants Franco (Roger Howarth) out of his life, it’s not going to happen anytime soon – and things will get more tense in coming weeks’ episodes as Liz Webber (Rebecca Herbst) grows closer to Franco.

When Liz makes her return to GH on this week’s episodes (she had a filming break because of her contract talks falling apart a couple of months ago), she’ll see Franco right off since they both work at General Hospital. Franco is down in the dumps because of his split with Nina Clay (Michelle Stafford).

Franco tells Liz about the break-up and Liz tells Franco about her search for a new home and wanting to start her new life without Jason on her own terms. Jason and Sam Morgan (Kelly Monaco), though, are convinced that Franco is stalking them and decide to confront him.

GH spoilers indicate that Franco tries to explain to Jason that they are both different from who they were before when they had shady encounters. The problem is, Jason and Sam think that Franco is still obsessed with them and don’t believe that he’s reformed and no longer nuts.

It won’t help when the duo see the strange sketch Franco did of Nina. Jason decides that Franco is still dangerous and tells Liz he doesn’t want Franco around Jake Spencer (Hudson West). Liz will not take well to Jason bossing her around or telling her what’s best for the kid.

The fact is, Jake has come a long way while working with Franco in art therapy and Liz sees Franco as helpful – even though she’s still very aware of Franco’s past. However, General Hospital spoilers say Liz seems to be willing to give Franco a chance to prove that he’s trustworthy and changed.

Liz’s refusal to kick Franco to the curb will irritate Jason and Franco might even salt the wound a little. But things will get worse as May sweeps picks up. At the last big Port Chuck event, the Nutcracker Gala, Franco escorted Liz after she and Jason had just split.

With Franco now single, we’re hoping to see Franco and Liz hit the red carpet again together – but likely only as friends at this point. The bottom line is – Franco is not the danger that’s stalking Jason. It’s another problem from Stone Cold’s hit man past.

Franco was cured when the tumor was removed. The person after Jason is on a vengeance quest according to GH spoilers and that’s not something that can be plucked out with a scalpel. While Jason focuses on Franco and Liz’s growing closeness, the real enemy closes in.

We know that Franco and Liz’s relationship will deepen and GH spoilers tease that it may be Franco that helps her get past Jason once and for all. The fact is, she needs to give up on Jason completely and leave him to Sam. That love triangle is old and past its due date.

Liz needs a new love and Franco is a perfect choice. He likes kids so won’t mind hers, can help with Jake, has no interest in impregnating her, and would probably stick around and be a good boyfriend – in part because he knows it would aggravate Jason. That’s a win-win.

What do you think GH fans? Should Liz listen to Jason and kick Franco out of her life? Or does Jason have NO right to tell her what to do since he dumped her and went back to Sam? Can Franco and Jason ever peacefully co-exist now that Jason knows their sordid history?