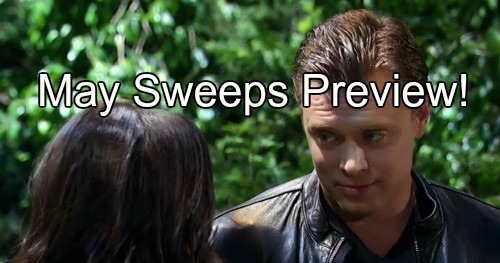 “General Hospital” (GH) spoilers for May Sweeps reveal more on the mysteries Helena left behind and a horrific accident in Port Charles that leaves lives at risk. GH spoilers tell us to expect the Nurse’s Ball, a wedding, and a new adventure for Sam and Jason.

Here’s what you can expect as sweeps roll out in May.

Lucas Jones (Ryan Carnes) and Brad Cooper (Parry Shen) will finally get hitched in conjunction with this year’s Nurse’s Ball. The ball will feature Lucy Coe (Lynn Herring), a speech from Robin Scorpio (Kimberly McCullough), plus Emma Drake (Brooklyn Silzer) is on hand plus an incredible opening number!

Magic Milo (Drew Cheetwood) is back and there are whispers that new nurse Amy (Risa Dorken) will perform this year as well. On the night of the Nurse’s Ball, Jason Morgan (Billy Miller) and Sam Morgan (Kelly Monaco) set off on an adventure that may put them in danger as a result of a discovery.

Early in the month, a terrible accident in Port Charles leaves lives in danger. No word yet on what it will be – but remember that sweeps train wreck a few years ago? It might be something of that magnitude…

Also, Michael Quartermaine (Chad Duell) gets Sabrina Santiago (Teresa Castillo) back but there’s a cost. Sabrina portrayer Teresa Castillo has teased a General Hospital spoilers that Sabrina might be back without her baby.

There is also talk that Carlos Rivera (Jeffrey V Parise) may have a short-lived escape from the PCPD but will be nabbed again by Paul Hornsby (Richard Burgi). Plus, Julian Jerome (William deVry) faces arrest at the Nurse’s Ball.

Liz Webber (Rebecca Herbst) is back on this week’s episodes and ready to carve out a new life including finding a new home and settling into her friendship with Franco (Roger Howarth) with whom she grows progressively closer which serves as an ongoing irritant to Jason.

It may be Franco that helps Liz finally get over Jason.

Hayden Barnes (Rebecca Budig) isn’t going anywhere and she and Liz continue to war while Hayden schemes against Nikolas Cassadine (Tyler Christopher). Casting spoilers indicate we may get to meet Rachel Berlin’s family sometime in May.

Also Claudette may make an appearance to stir up trouble!

Sonny Corinthos (Maurice Benard) and Michael take a trip together that scares Carly Corinthos (Laura Wright) – is that how Michael gets Sabrina back? Also, Carly and Hamilton Finn (Michael Easton) dig into the mystery of the kidney and spoilers tease that Josslyn Jacks (Eden McCoy) may fall ill.

Other May Sweeps GH spoilers tease that a secret comes out that stuns Sonny and Anna Devane (Finola Hughes). Will they finally discover that it was Paul that shot Sonny and why? Anna struggles for closure over the death of Duke Lavery (Ian Buchanan). Paul factors heavily into her feelings and how it plays out.

Curtis Ashford (Donnell Turner) and Valerie Spencer (Brytni Sarpy) get closer but she may be jealous when he’s fixated on his concern for Hayden. Is there more to Hayden and Curtis than friendship? Sonny and Ava Jerome’s (Maura West) custody battle comes to a surprising and final conclusion.

Kiki Jerome (Hayley Erin) may get closer to Dillon Quartermaine (Robert P Watkins) after Morgan Corinthos (Bryan Craig) stuns Kiki with an announcement. Also, Ava gets a new man in her life – will it be Scotty Baldwin (Kin Shriner) or someone else? Who will the mob moll allow into her life?

Finn finds a woman to distract him from his work – we’re wondering if that’s Carly – or someone else. The lizard loving doc’s mysteries unfold slowly and Griffin Munro (Matt Cohen) sees a mistake from the past come back to haunt him and he also discovers something about his past he never knew.

Alexis Davis (Nancy L Grahn) continues to struggle with how she feels about Julian once it becomes obvious he’s mobbed up again. Ned Ashton (Wally Kurth) and Olivia Falconeri (Lisa LoCicero) heat up but Julian’s renewed mob lifestyle may throw a kink in their new love. Ned doesn’t want Julian around!

What do you think about the action coming for May Sweeps? Will Anna finally get justice for Duke? Can Julexis survive this mob mess? Will Paul pay for his criminal actions or walk away free? What is Carlo’s fate? What does Helena have planned for Laura and who is stalking Jason and Sam?

Share your comments below and come back to CDL for more “General Hospital” spoilers and news every day.