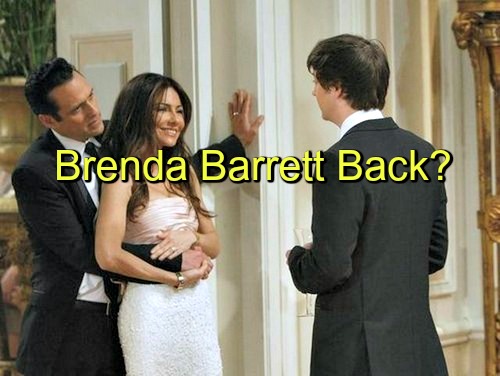 ‘General Hospital’ (GH) spoilers tease that Vanessa Marcil may be returning to ‘GH’ as fan favorite Brenda Barrett – one half of the popular former super couple “Sonny (Maurice Benard) and Brenda.” ‘GH’ rumors have been teasing for over a year not that TPTB at the ABC soap opera were trying to get Marcil back to Port Charles, and the actress herself has even teased on more than one occasion that she may be returning.

Vanessa Marcil took to Instagram this week and shared a photo of what appears to be some sort of badge or contract with Walt Disney. And, as you all know Walt Disney owns ABC, and therefore ‘General Hospital.’ When ‘GH’ spoilers fans seen that Vanessa was working on another ABC gig, they were obviously thrilled – and began speculating that this time the rumors were true and Marcil is really returning to the soap opera.

The last time we saw Brenda Barrett in Port Charles was in 2013, she stopped by for a guest appearance after her 2011 exit and attended the Nurse’s Ball – which was honoring her not so dead BFF Robin Scorpio-Drake (Kimberly McCullough) that year. If Brenda were to return to Port Charles, now would be the absolute perfect time – if you are a Brenda and Sonny fan that is.

‘General Hospital’ spoilers tease that Sonny and Carly (Laura Wright) are in the midst of a possible messy break-up. Carly is furious Sonny lied about the fact that he could walk, and blames him for Morgan’s mess and Kiki getting shot, plus they can’t decide on what to do with Morgan now. If there ever was a perfect time for Brenda Barrett to return to ‘General Hospital’ and give Sonny Corinthos a shoulder to cry on – it would be now.

What do you think ‘GH’ fans? Is Vanessa Marcil returning? Or is she working on a different ABC project? If Brenda Barrett is back – would you like to see her with Sonny Corinthos? Let us know what you think in the comments below and don’t forget to check CDL for all of your ‘General Hospital’ Spoilers and news!