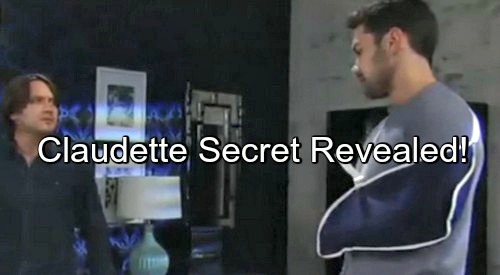 “General Hospital” (GH) spoilers for the Friday’s episode, the March 4 cliffhanger show reveal that Carly and Sonny will decide Morgan’s fate, Julian confronts his devastated sister, Lulu and Maxie have a sad girls’ night out, and Nathan mulls over the Claudette situation.

You’ll recall that Paul threatened to take down Sonny Corinthos (Maurice Benard) and could jail Morgan as a PR move and to punish Sonny. Carly thinks Morgan should be committed but Sonny’s own phobias about confined spaces are preventing him from seeing reason.

Meanwhile Morgan is blithe and continues to ignore the harsh reality of his situation. He’s confident that super-litigator Diane Miller (Carolyn Hennesy) can get him out of this scrape unscathed. GH spoilers warn that Dr Andre Maddox (Anthony Montgomery) may not be on board with Morgan being back at home, though.

After all, that’s where Morgan was when he stole the gun and ran amok. Morgan will be devastated when the decision is made to commit him to Shadybrook. Morgan thought he was going to be chilling at home playing X-Box and now he’s got to face real consequences of his actions.

Nathan West (Ryan Paevey) also wonders about consequences when it comes to the lies he’s told Maxie Jones (Kirsten Storms) about Claudette. Turns out she’s not his dog- duh… Nathan confides in Dante Falconeri (Dominic Zamprogna) the truth about this woman he loved.

Nathan wants advice from Dante, but is Dante really a reliable source of relationship wisdom? He is fresh off a divorce after all. Maxie Jones (Kirsten Storms) and Lulu Spencer (Emme Rylan) also talk about their love lives.

Lulu is bawling and says her marriage is over. Did she forget Dante dove into freezing water to save her life, carried her to the hospital, then asked her to come back to him? Hmm… Hope Maxie stocked up on tissues before that get-together.

Ava Jerome (Maura West) may have escaped jail for the gun running, but she can’t escape her angry older brother Julian Jerome (William deVry). He wants to know what she was up to with Dixon (Troy Ruptash).

Will Ava come clean to Julian about Paul’s blackmail, the intimidation sex, and all her other trials over the last few months? Will Julian come down on her like a hammer? Or will he tell Ava that she should have come to him sooner so he could help her?

Also, when will we see movement from Kiki Jerome (Hayley Erin)? And how will Jason Morgan (Billy Miller) handle the ongoing annoying presence of Franco (Roger Howarth) at Liz Webber’s (Rebecca Herbst) side – will next week’s episodes help clear this up?

Don’t miss a moment of the Friday March 4 cliffhanger GH and be sure to check back with CDL often for more “General Hospital” spoilers and news.